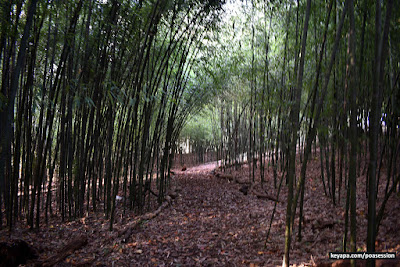 Hidden to the side of the Rutgers Gardens in East Brunswick, New Jersey is a sight that many people in the Northeast of the USA may not believe could exist: a Bamboo Forest!

The half a hectare monoculture of bamboos started as a small experimental grove in the 1950s, but has grown into one of New Jersey's most intriguing "secrets."


The Bamboo Forest can be reached by taking the Ryder's Lane exit from Route 1 South, and then continuing to Log Cabin Road, which will deposit you onto a small parking lot next to a building. Walk northeast past that building and you'll come upon the entrance to the Bamboo Forest. 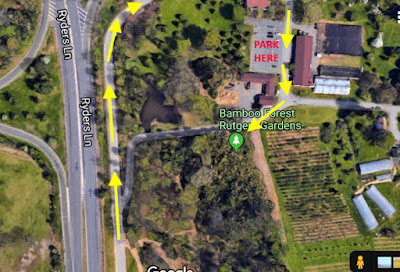 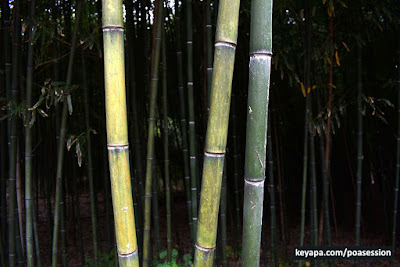 The bamboo is Phyllostachys nuda, and it forms a dense monoculture that is quite impressive. Walking paths weave between the culms, shaded by the overarching bamboo plants, and I had to use relatively long exposure times to get good pics. 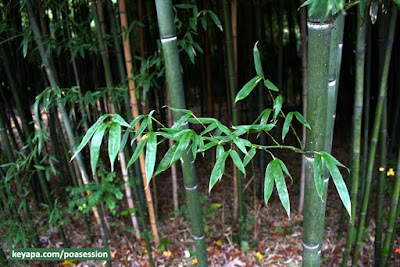 All in all, we really enjoyed the sidetrip to this magical forest, and I recommend it for anyone passing by the Rutgers University area. Bring a camera, and be prepared to be amazed at this unusual sight! 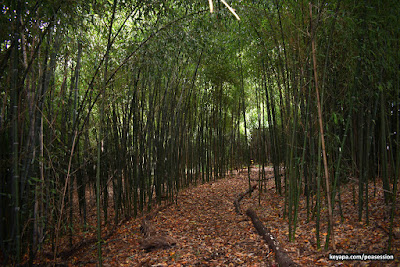 at November 05, 2019 No comments:
Email ThisBlogThis!Share to TwitterShare to FacebookShare to Pinterest
Labels: Bamboo, Phyllostachys

I hiked Bear Mountain in New York State in October 2019, and the most surprising discovery I made was the presence of quite a few colonies of Little Bluestem (Schizachyrium scoparium).

The species was not present within the canopy covering of the surrounding trees, but was instead found in rocky and exposed portions of the trail (blue, then white marks), which started out from near the Bear Mountain Inn and ended in the Perkins Memorial Tower.

Although most of the colonies were small and had only a single or a few specimens, there were occasional areas where S. scoparium formed a larger field. One was located bear the top end of the trail, above a rocky outcrop with a very distinctive boulder sitting precariously on its surface.

At the very top of Bear Mountain, where the impressive Perkins Memorial Tower loomed above the crowds, Little Bluestem gave way to another tallgrass prairie species, which I tentatively identified as Panicum virgatum (switchgrass).
This species was slightly taller than Little Bluestem, with open airy panicles. I did not have my macro lens with me, but I did manage to take in situ pics of the panicles, which had spikelets containing a single floret, and unequal sized glumes.

Both S. scoparium and P. virgatum were major components of  the tallgrass prairies that used to dominate the American landscape, and it was interesting to see healthy populations of these species still present in numbers here in the East Coast. 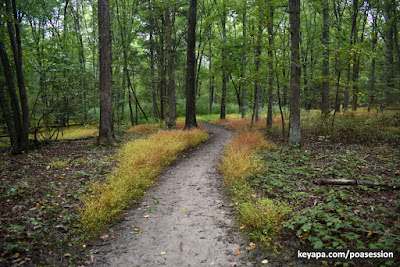 In October 2019, I visited Cheesequake State Park in Matawan/Old Bridge, NJ, which is notable because it lies in the transition zone between two different ecosystems, and harbors organisms that are native to both south and north New Jersey.

One of the more interesting things I noticed was that the carpets of invasive Microstegium vimineum (Japanese stiltgrass) that covered some of the forest floor had turned golden in color, and made the scenery seem quite magical and surreal.

But perhaps the highlight of the place for me was the Crabbing Bridge, a long boardwalk that passed over the marshlands in the park and was surrounded by tall grasses.

Birds flew and waded in the grasses that stretched into the distance.

Although they were too far for me to make an ID easily, at least some of them were Sporobolus pumilus  (saltmeadow cordgrass), which was previously named Spartina patens.

Also present in the park was the invasive Phragmites australis, which is one of the more ubiquitous grasses in the state, and which I will be discussing in a separate future post. 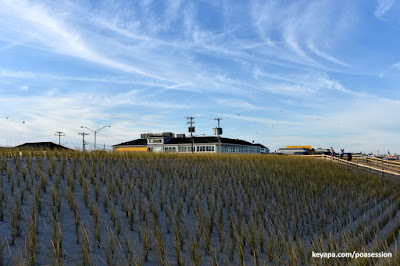 I visited the beachtown of Seaside Heights, NJ in late September, and was instantly amazed at the endless fields of Ammophila breviligulata (American Beach Grass) that decorated the tall dunes between the streets and the beach proper. 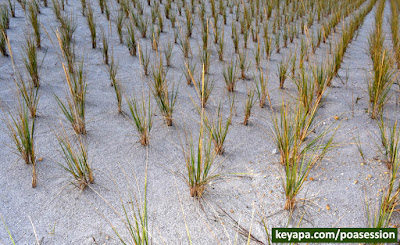 It turns out that the United States Army Corp of Engineers have been very busy this year, replenishing the sand dunes that protect towns from storms at sea and planting literally hundreds of thousands of the remarkable grass.

A. breviligulata is a foredune pioneer species that helps in the development of sand dunes by capturing sand, while its long roots help to stabilize the resulting dunes.

It rapidly colonizes bare new dunes by sending out rhizomes with very long internodes, and from its nodes new ramets spring up. It can also withstand very high rates of sand accretion of up 1 meter per year, another trait that makes it a prime candidate for beach sand dune maintenance.

The species is fairly easy to identify. The dorsal surface of its leaf blades are decorated with deep vertical lines, and the blades roll together towards their tips.

Old brown leaf sheaths wrap around the bases of the grass.


The long narrow spike-like panicles of the species are also easily spotted, and the spikelets are fairly large, making it somewhat easy to take in situ macro photos.

I have to say again how amazing it was to see the fields of A. breviligulata, and it would be interesting to come back to see how the species prospers (or not) as the years pass.
at October 01, 2019 No comments:
Email ThisBlogThis!Share to TwitterShare to FacebookShare to Pinterest
Labels: Ammophila, Ammophila breviligulata, Dunes 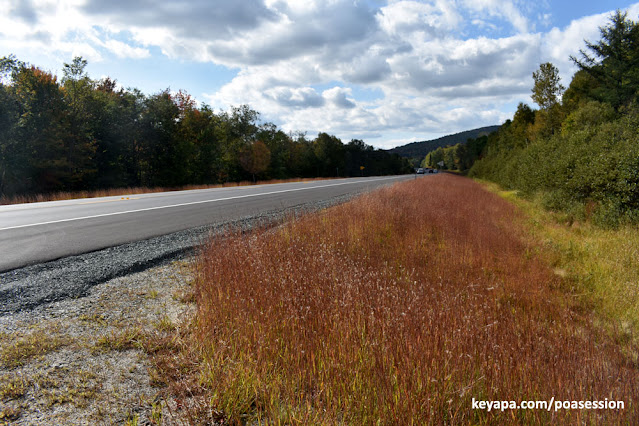 I've always had a soft spot for Schizachyrium scoparium (Little Bluestem). Not only is this species quite handsome (with some cultivars making the transition to spectacularly beautiful), but this was one of the major components of the tall grass prairies that used to dominate the American landscape, before settlers originally from Europe arrived and converted the rich lands to another type of grassland (maize fields).

The first time I encountered Schizachyrium scoparium was in the White Sands Monument in New Mexico, where I stumbled on individual specimens. But on a trip to the White Mountains in New Hampshire, I finally saw entire fields of the grass.

Schizachyrium scoparium dominated many of the roadsides in the area, the straight and tall grass forming red monoculture carpets on the sides of highways and local streets.

This was very evident along route 302 from the town of Caroll to Crawford Notch State Park, and even in the islands and sides of Interstate 93. Schizachyrium scoparium was also present along Main Street of the town of Lincoln, NH, especially near the entranceway to Interstate 93.

I even found S.scoparium lining the steel barriers along a railroad track!

It was obvious that masses of the grass along the roadside were regularly mowed. Some of the mowed grass had  a reddish tinge to them, and in some areas single blades of Little Bluestem that had been missed by the mower rose into the roadway like lonely sentinels.

The species was noticeably absent in deep forest, as well as in higher elevation areas, although I found a few specimens slightly into the UNH Trail along State Route 122, east of Lincoln.

Little Bluestem is also fairly easy to identify. It stands up to around 1 meter tall, with thin erect blades and reddish culms (at least in the Autumn).

The ligule is membranous, and the fluffy white seed heads that rise in zip zag fashion is another identifier of the species. 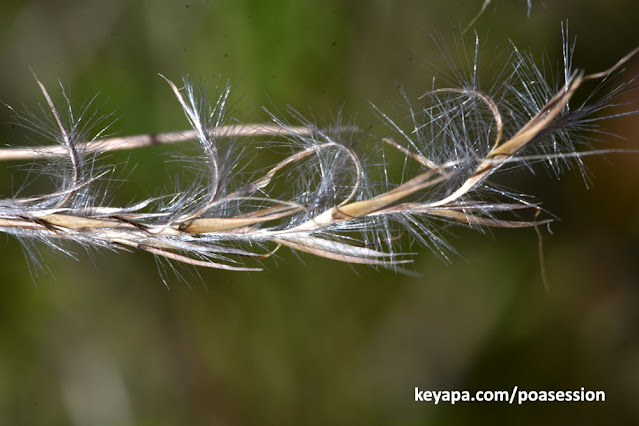 The anthers and feathery stigmas are purplish in color and quite tiny, perhaps at most 2 mm in length. I had a great time taking in situ macro shots of the beautiful spikelets,with the sharp pointed glumes. 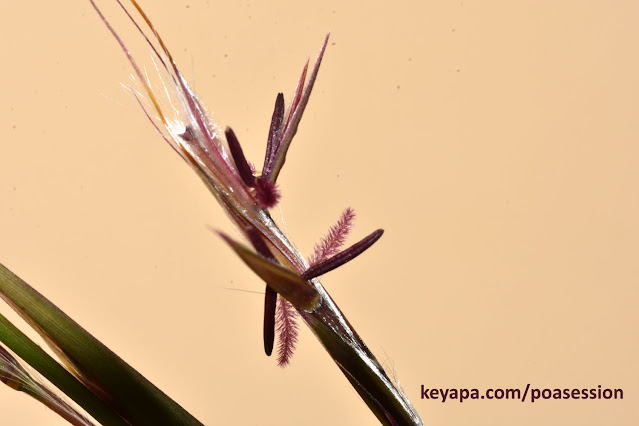 All in all, I had a great time documenting the presence of this species in the White Mountains area of New Hampshire, and I noticed that Little Bluestem was still prevalent as you made your way south along Interstate 93 and other highways, with remnants showing up in Connecticut as well. 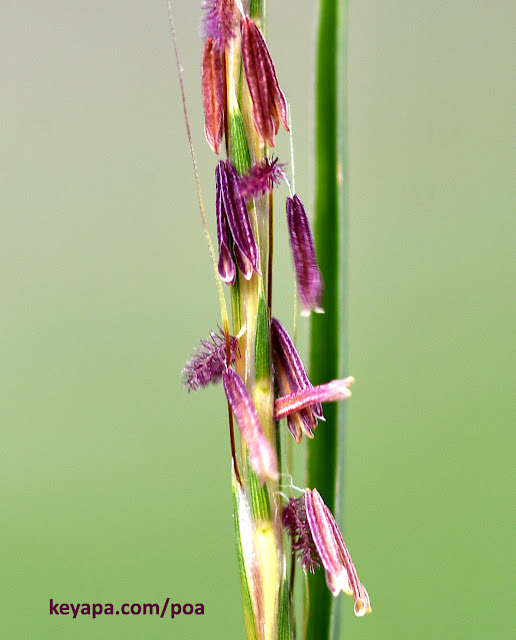 It is a handsome species, and I can only imagine with longing what immense fields of this and other tallgrass prairies plants must have looked like before the coming of the Empire of Maize ;-) 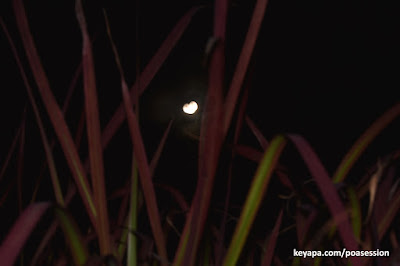 The moon tonight is being called a "micromoon" because it appears just a bit dimmer than usual. This is because it is at apogee, or its farthest distance from Earth, and thus appears about 14% smaller and 30% dimmer than when it is at its closest point to Earth, which is known as the perigee.

It was a cloudy night, but I managed to take a pic of tonight's very unusual "micromoon" behind a stand of red cogon grass (Imperata cylindrica 'Red Baron'). Interestingly enough, because of some minor trembling of my arm it just so happened that the moon was distinctly heart shaped in the picture!

A year ago, I was at the National Arboretum in Washington, DC in the dead of winter. I was there mostly for the Bonsai displays, but it turned out the arboretum also had an entire section set aside for ornamental and  lawn grasses.

While strolling through this section, I suddenly came upon the dried remains of an absolutely amazing grass specimen.

The grass was so tall that it almost matched the height of a nearby tree! This would not have been that much of  a rarity if it was a bamboo, but this species was most definitely not of the subfamily Bambusoideae.

I managed to find the label for the specimen, and found out it was Arundo donax, which at the time was new to me. This species is also known by a host of common names, including carrizo, arundo, Spanish cane, Colorado river reed, wild cane, and giant reed. 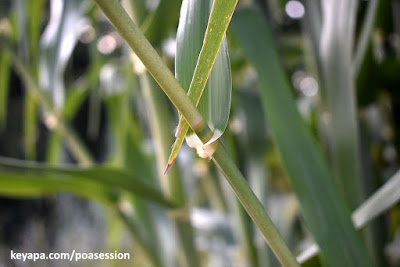 Now fast forward more than a year later. I was in the Frelinghuysen Arboretum  in Morristown,  New Jersey, and I was suddenly  again confronted by the enormous 6 meter tall plant!

I really did not expect the grass to survive at such a high latitudes, but  there it was right in front of me, towering over a wooden bench and nearby parked cars. 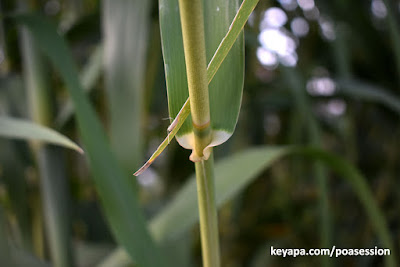 Arundo donax is one of the fastest growing plants, and it is able to add up to 10 cm to its height everyday (Dudley et al, 2008). It is also one of the most invasive grasses around in riparian ecosystems, able to outcompete both herbaceous and woody vegetation after a fire (Coffman et al, 2010).

The interesting thing about its competitiveness though, is that unlike many of the invasive grasses, it is a C3 plant, which normally is not as efficient and productive as C4 plants. Researchers found that its dominance and productivity was actually due to its highly active Rubisco enzyme, which is the main enzyme involved in photosynthesis, and which results in the species having a photosynthetic  capacity similar to C4 grasses  (Weber et al, 2016). 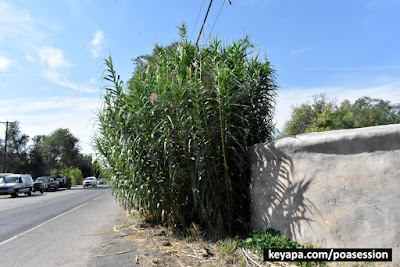 I encountered this species again on a trip to New Mexico in September 2019, when I noticed that they were growing along the walls of some homes in Albuquerque. In this case, I was driving when I  noticed grasses that seemed to reach all the way to the electrical lines!

I know that A. donax is considered an invasive grass (although there are plans to harness its productivity for bioenergy projects), but it really is quite an interesting  species. I look forward to encountering it more (and when flowering) in the future.