Phenotypic (Behavioral?) Plasticity in a Grass

I came across this grass that varies its growth pattern based on some unknown environmental cues.

When I first encountered it, it was growing on hard pavement, and both the stems and panicles were pressed completely flat against the ground. However, when later grown in more optimal conditions, the specimen adopted a much more upright position.

This behavior is quite fascinating, and might allow the species to occupy a wider range of environments than if it had a static phenotype.

Examination of the tiny spikelets seem to indicate it is of the genus Poa.

at July 30, 2019 No comments:
Email ThisBlogThis!Share to TwitterShare to FacebookShare to Pinterest
Labels: Behavior, Poa 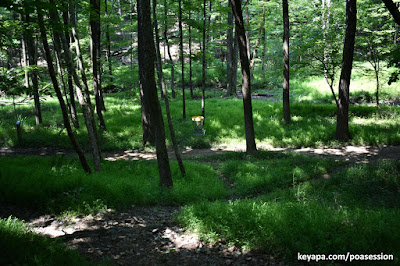 During one particular hike in Hacklebarney State Park, in Long Valley NJ, I noticed a low growing grass that spread in a dense mat along the sides of the trail.

The trail was in a shaded forested area, and so I was somewhat surprised to see the grass flourishing in such an environment.

When I knelt down and examined it, I noticed that the grass that comprised this surprising monoculture had relatively tiny elegant leaves and reminded me of small bamboo.

During the next hike at Chimney Rock State Park, in Bridgewater NJ, I made sure to bring my SLR camera and decided to take pics of this grass.

The species, Microstegium vimineum, was just as prevalent in this park, and I was amazed at the way it formed dense mats even in relatively shaded locations.

The species has a propensity to form dense monocultures along the sides of trails, so hikers seem to be passing through a living carpet on either side.

It was also fairly easy to recognize the grass. Each leaf had a whitish strip running vertically along its dorsal surface, and a close look at the collar region showed ciliated hair growing in profusion.

But no matter how elegant or beautiful the grass might be, it is an invasive, and one that is particularly aggressive against native plants.

It was accidentally introduced into the USA in packing material from East Asia in the early 1900s, and it has now spread throughout the entire Eastern part of the country.

One interesting thing about the invasion is that the species seems to spread fairly slowly when left untouched, which indicates that its recent fast spread may have been due to accidental human transport (Rauschert et al, 2010). 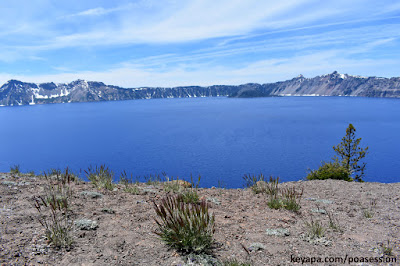 I was hiking through one of the trails on Crater Lake in Oregon when I came upon a colony of bunch grasses that overlooked the beautiful waters. With their purple inflorescence waving in the breeze and the beautiful waters as background, I thought it was a kinda magical sight.

I believe they were Elymus elymoides, a widespread species that doesn't make it that often as an ornamental, but they were gorgeous anyways at the time. 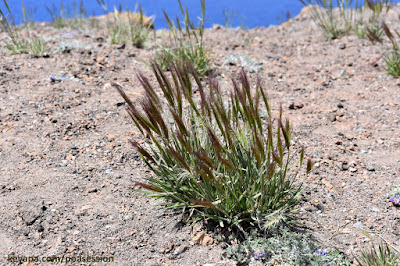 at July 26, 2019 No comments:
Email ThisBlogThis!Share to TwitterShare to FacebookShare to Pinterest
Labels: Elymus

Life in the Cracks 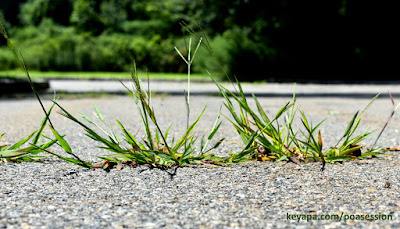 It's interesting how much life goes on around us without most people noticing or caring. Even in the cracks on our streets, life finds a way to germinate and flourish.

This is even more so for the grasses, which are true survivors and resilient enough to set seed and go through their entire life cycles in the spaces and cracks of our transient technological world. 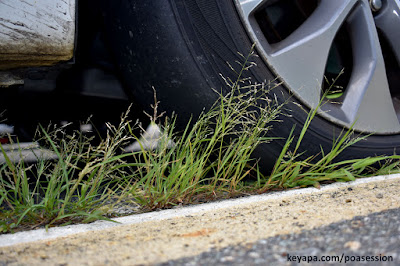 Here are some photographs I took of some grasses (e.g. Digitaria crab grass species) flourishing between the spaces, and living in the Cracks.

at July 24, 2019 No comments:
Email ThisBlogThis!Share to TwitterShare to FacebookShare to Pinterest
Labels: Digitaria, Life in the Cracks
Newer Posts Home
Subscribe to: Posts (Atom)