A native among the Stiltgrass - Sorghastrum nutans (Indian Grass) 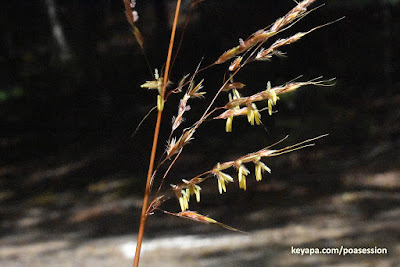 I've gotten so used to seeing Japanese stiltgrass (Microstegium vimineum) during hikes, that it's always nice to see some other beautiful grass species along the trail. 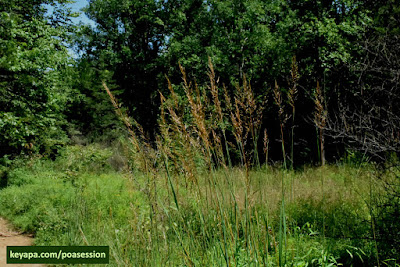 The hike at Lewis Morris County Park in Morristown, NJ was turning out to be the same, with carpets of the invasive grass lining the sides of the trail, when I found myself looking at a tall stately looking grass in an open clearing. The specimens were notable for the large yellow stamens protruded from the spikelets. 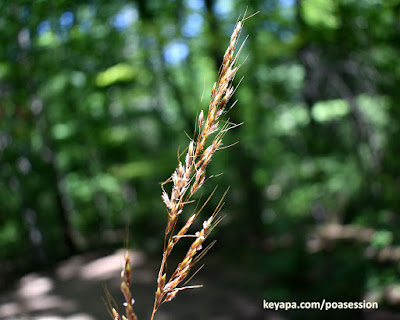 The grass turned out to be Sorghastrum nutans (Indian grass), a warm season native that used to be a common component of the tallgrass prairies that used to dominate the American landscape. 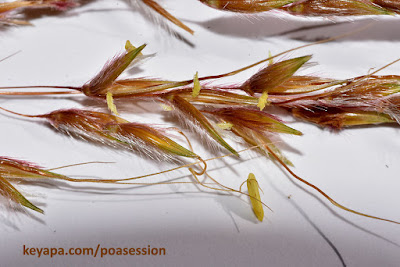 This was an awesome find, and I hope to be able to hike the trail again and take more photographs of this majestic species.
at August 31, 2019 No comments:
Email ThisBlogThis!Share to TwitterShare to FacebookShare to Pinterest
Labels: Microstegium vimineum, Sorghastrum 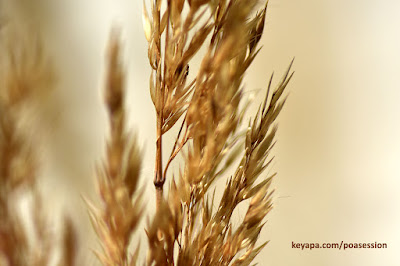 Calamagrostis is a mainly-temperate genus with around 260 species in it. Grasses in this genus have panicles with bisexual spikelets that only contain one floret. 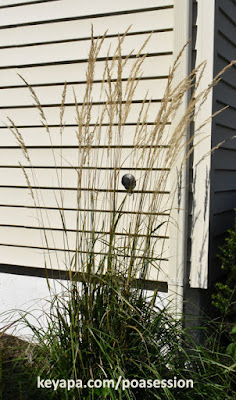 One of the better looking ornamental grasses is Calamagrostis x acutiflora 'Karl Foerster', with its vertical habit and inflorescence.

It is a natural hybrid that is a cross between C. arundinacea and C. epigejos, which are two species native to Europe and Asia. 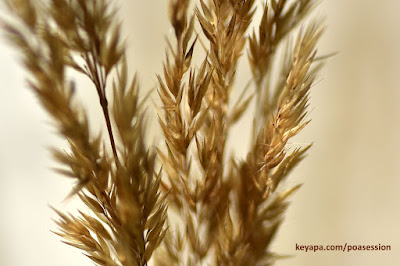 I've always liked how they looked, especially once the inflorescence have dried out, but I gained a new perspective on their beauty when I took in situ macros of the dried spikelets.

The structures obviously aren't colorful, but I like how the relatively smooth looking spike-like panicles at the non-macro level resolves into a visage of sharp-pointed and tightly-packed spikelets when magnified.

It calls to mind the phrase from Shakespeare that There are more things in heaven and Earth, Horatio, / Than are dreamt of in your philosophy.
at August 24, 2019 No comments:
Email ThisBlogThis!Share to TwitterShare to FacebookShare to Pinterest
Labels: Calamagrostis, Macrophotography 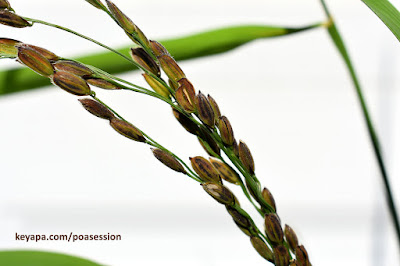 Some people are surprised to discover that you can actually grow rice to seed in the Northeast, and that it's fairly easy to do so.

I have been growing container pots of this grain every year for many years now, and the sense of accomplishment when I harvest the rice at the end of the growing season is always welcome.

The main problem is actually the short growing season here, and I sometimes bump into the colder temps of October before barely managing to produce the rice.

All you need to do is buy some brown rice of the variety that you'd like to grow, soak  them overnight (with diluted hydrogen peroxide or bleach), then drop onto culture media (usually potting soil or better).

Once the rice seedlings have grown, just transfer to a larger container and keep the soil moist.

Varieties that are ready in 90 days are great, but I've also grown those that take 120 days to harvest.

Obviously, there's no way for you to actually grow enough to feed yourself for the year, but growing the grain does give you a better appreciation for the work of the farmers who supply us with our food.

So, go ahead and try it. It's easy and fun!
at August 22, 2019 No comments:
Email ThisBlogThis!Share to TwitterShare to FacebookShare to Pinterest
Labels: Oryza, Rice 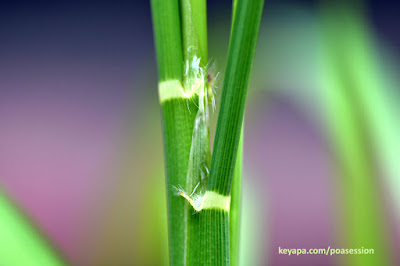 I have recently started taking macro shots using a new lens that I bought. Diving into macro has opened up an entirely new world, one which has revealed the beauty of barely visible objects that I would normally not even give a second glance. 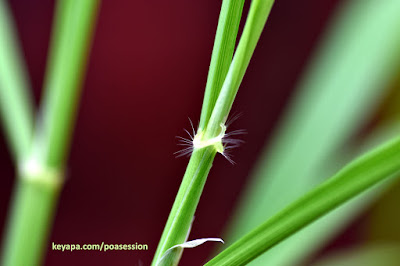 My equipment is fairly basic since I am a beginner, and includes the somewhat basic Nikon D3400 DSLR and a Tokina at-X PRO M 100mm F2.8 D Macro Lens with a Nikon mount. 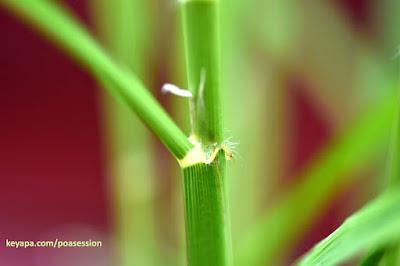 As you can see from the images, it's  now possible for me to take quite nice photos of even the rice ligules and auricles.

I do have one big warning for people trying to use the D3400 with the Tokina 100 mm Macro Lens. You cannot use autofocus at all with this combination, and so you need to be able to work with manual settings. I believe the reason is that neither lens nor camera has a built-in auto-focus motor.

at August 19, 2019 No comments:
Email ThisBlogThis!Share to TwitterShare to FacebookShare to Pinterest
Labels: Macrophotography, Oryza, Rice 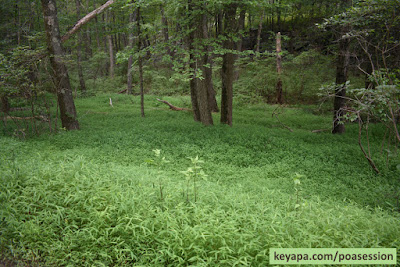 Microstegium vimineum seems on first glance to be ubiquitous in the Delaware Water Gap National Recreation Area. It lined many of the local roads that wound their way along Worthington State Forest on the New Jersey side, and it was one of the most abundant species even on trails such as the popular Mt. Tammany Red Dot Trail.

In addition to creating dense mats along the sides of the trail, Microstegium vimineum even sprouted from the bases of large stones along the trail path itself!

In a previous post, I mentioned that this species is quite invasive, and possible evidence of its aggressive nature was in full view in the area.

A multitude of fern species normally thrives in the Gap, their elegant leaves forming a dark green carpet under the shade of the tree canopies.

However, infestations of Japanese Stiltgrasss can now be found next to stands of these ferns, from a few blades existing as small clumps to the side of the ferns, to entire monocultures of the invasive grass.

I also frequently saw individual fern plants almost totally surrounded by Japanese Stiltgrass, the larger leaves of the fern rising from the sea of grasses like the frantic arms of a drowning man.

The ability of this C4 species to grow in relatively shaded areas was also in evidence, with lush carpets of Japanese Stiltgrass sometimes blanketing the ground under the tree canopy.


I was even amused to discover new colonies of the invasive grass clustering around the shaded bases of large trees, an area not usually conducive to the growth of grasses. 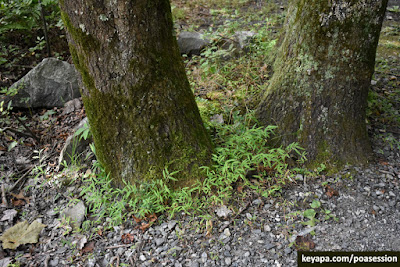 at August 18, 2019 No comments:
Email ThisBlogThis!Share to TwitterShare to FacebookShare to Pinterest
Labels: Invasive, Microstegium vimineum

It's a common sight in beaches: sand dunes that rise behind the beach goers like towering castle ramparts. Most people barely pay any notice to these natural formations, but in fact these bulwarks act to protect the existence of the beach itself by preventing beach erosion. They also protect against coastal storms by absorbing the initial impacts of storm surges, thus preventing or delaying inland flooding.

Grasses like Ammophila breviligulata ("beach grass") and Panicum amarum ("bitter panic grass") play major roles in the formation and maintenance of coastal sand dunes. Sand dunes form when strong winds drive sand particles towards an obstruction on the beach, where the particles are stopped and start accumulating over time.

Grasses such as A. breviligulata and P. amarum  act as large obstructions, and sand soon accumulates at their bases (whether gradually or rapidly during storms). In this way, these grasses slowly help in the formation of the huge sand dunes that line our beaches.

However, the forces that build dunes can also threaten to bury them. Fortunately, both grasses have evolved mechanisms to help them survive such burials. In the case of C3 grasses like A. breviligulata, the plants increase allocation to root biomass. C4 grasses like P. amarum on the other hand allocate more energy towards above ground structures like stems and leaves (Brown and Zinnert, 2018). But both practices result in the maintenance of photosynthetic rates and the continued survival of the plant.

The difference in their response stems from the photosynthetic methods employed by both. Grasses with C4 photosynthesis have higher photosynthetic rates at low CO2 levels, high light, and warm temperatures, which allows greater efficiency in their use of resources such as water and nitogren (that is, C4 grasses can fix more carbon per unit of water and nitrogen). This means that under burial stress, the limiting factor for C4 grasses is not nutrients or water, and they can concentrate instead of producing more above ground biomass to capture light.

These grasses also help maintain the structure of the dune due to their extensive fibrous root and rhizome system, which hold the sand particles together (Brantley et al, 2014).

I briefly visited Sandy Hook Beach  in New Jersey (Parking Lot D), and saw quite a lot of  flowering P. amarum, with a few flowering A. breviligulata interspersed in the dunes. This was interesting because the latter is normally the dominant dune species in the area, so I would be interested in revisiting the area again in more detail sometime in the near future. 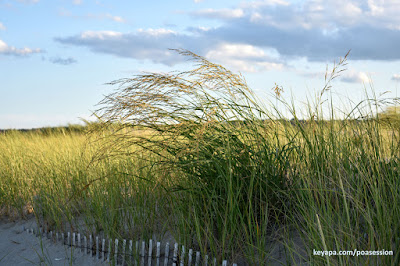 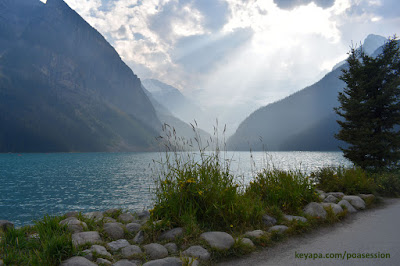 We visited the gorgeous Lake Louise in Baanf National Park in Alberta, Canada in 2018, and one thing I noticed were the nice ornamental grasses that lined the lake banks. 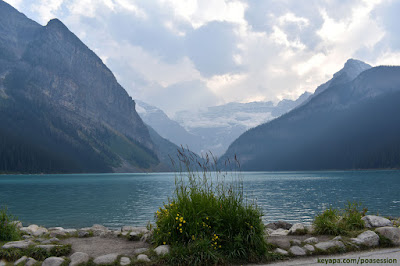 The combination of the grasses and the lake and mountains as backdrops was simply magical, and I regret not keying the specimens to species, or at least genus. 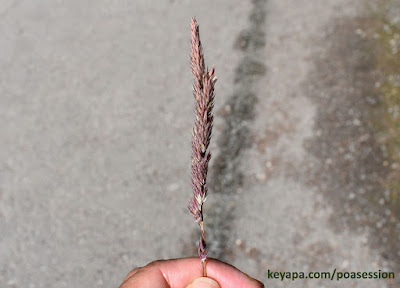 Perhaps someday I'll be able to go  back there again and complete the job ;-) 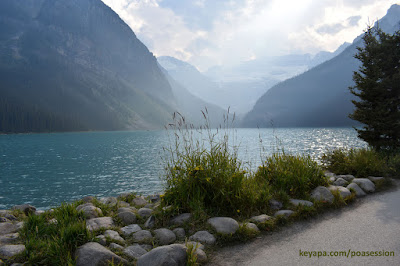 at August 09, 2019 No comments:
Email ThisBlogThis!Share to TwitterShare to FacebookShare to Pinterest
Labels: Ornamental 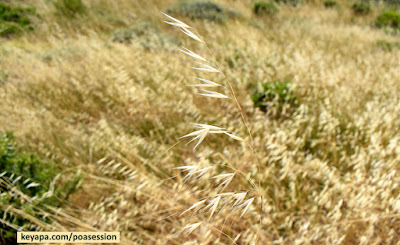 When I visited the Marine Mammal Center north of San Francisco in the Golden Gate Recreation Area, I noticed the hill that I had to climb from the parking lot was covered in a field of beautifully golden grass. 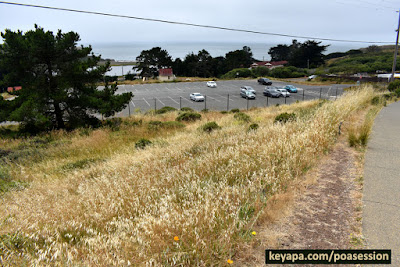 Many grasses in California turn a golden color as summer settles in, and there were various species of grass that comprised this field. But one of the most striking was a relatively tall species with needle-like awns in its inflorescence. 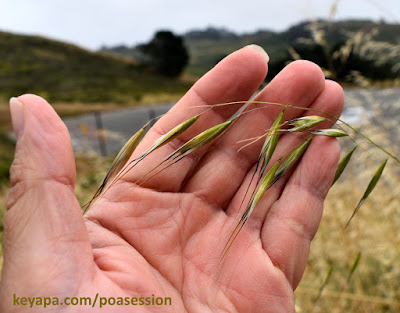 It was purple needle grass (Nasella pulchra), a tufted perennial that is native to California, and a species that was actually declared the State Grass in 2004. The purple color comes mainly from the two paired glumes that protect the single floret in each spikelet.

I was quite excited to see it, as many habitats in the state have been swamped by invasive grasses. This is particularly noticeable in the state's Central Valley, where annual grasses like the dreaded cheatgrass (Bromus tectorum) have largely replaced the original perennials.

The coastal prairies have been less affected, and Golden Gate Recreation Area has made it a point to protect those habitats within its borders, so kudos to them for that.

at August 07, 2019 No comments:
Email ThisBlogThis!Share to TwitterShare to FacebookShare to Pinterest
Labels: Bromus tectorum, Nasella

Beauty in the Dumps (Setaria faberi) 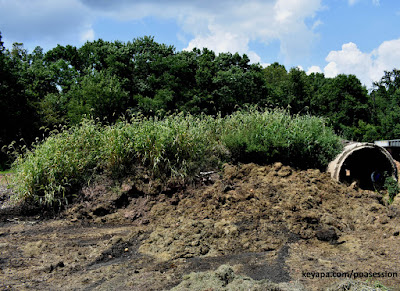 Even in the midst of a rather odorous and muddy dump, one can find beauty.

This stand of Setaria faberi (locally known as Giant Foxtail) grows atop a large mound of mud and rotting vegetation, the drooping 15 cm long spike-like panicles fluttering in the slight breeze. 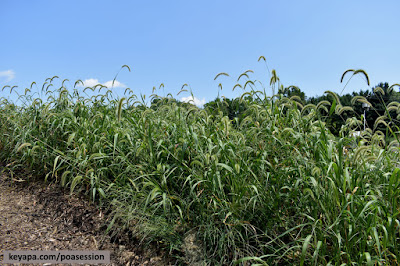 The species is a C4 annual grass that (like many other exotic grasses) got into the USA in the early 1900s as a hitchhiker in shipments from East Asia.  It is very much a lover of disturbed areas, but due to its large size and graceful inflorescence add a touch of beauty to its immediate surroundings.
at August 04, 2019 No comments:
Email ThisBlogThis!Share to TwitterShare to FacebookShare to Pinterest
Labels: Setaria
Newer Posts Older Posts Home
Subscribe to: Posts (Atom)