Feed me! A carnivorous grass? 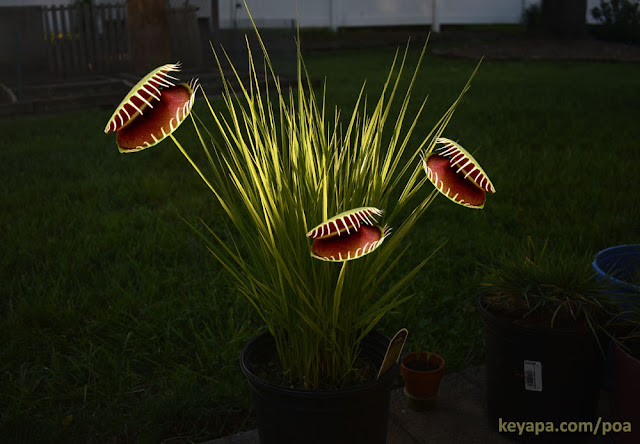 Grasses get their carbon from the air, transforming it into carbohydrates via photosynthesis. But grasses need other elements too, including nitrogen. Unfortunately, the nitrogen in the air is in a form that is too tightly bonded to be harvested directly, and so grasses get this element from nitrogen compounds that are the by-products of decomposition in the soil, or via nitrogen fixing bacteria (such as those in legumes). But what happens if you live in nitrogen poor soils?

Carnivorous plants are not the norm in plants, and have mostly been restricted to species that live in nitrogen poor environments and cannot get their N requirements the old fashioned (and less energy intensive) way, by absorption of N compounds through the soil or N-fixing bacteria. Instead, such plants kill and eat animals to get this essential element from their victims.

The fascination with such carnivorous plants as Nepenthes and Dionaea made me wonder whether some grasses have made the leap to carnivory, at least to supplement their normal nitrogen intake.

Incredibly enough, there is some evidence that some grasses have made the leap to utilizing N from animal sources, albeit indirectly, through partnerships with endophytic fungi. The way they do this is simple and quite interesting, and involves fungi that kill insects in the soil. Such fungi bore thorough the insect cuticle, proliferate within, and ultimately kill it.

One type of fungi in the genus Metarhizium (M. robertsii) is also an endophyte of the grass Panicum virgatum (switch grass), one of the native species in the old prairies of North America. It lives within the plant roots and in fact is usually found clustered in space close to such grasses.
Researchers found that P. virgatum root hairs proliferated in the presence of this fungus (Sasan and Bidochka, 2012), and that amazingly enough, the grass "feeds" its fungal boarders carbon photosynthate (Behie et al, 2017).
In return, the grass gets a significant amount of nitrogen from the insects killed by the fungus!
Researchers tagged test insects with the stable radioactive isotope N-15, and these insects were then exposed to M. robertsii associated with the roots of P. virgatum plants. The researchers discovered that after about a month, up to 48% of the nitrogen in the grass was directly derived from the killed insects, an astonishing percentage that points to the importance of this symbiotic relationship (Behie et al, 2012).
So, there may not be real carnivorous grasses (yet!), but thanks to symbiotic relationships, some grasses get the same positive benefits of killing animals anyways ;-)

What determines the maximum height of bamboos? 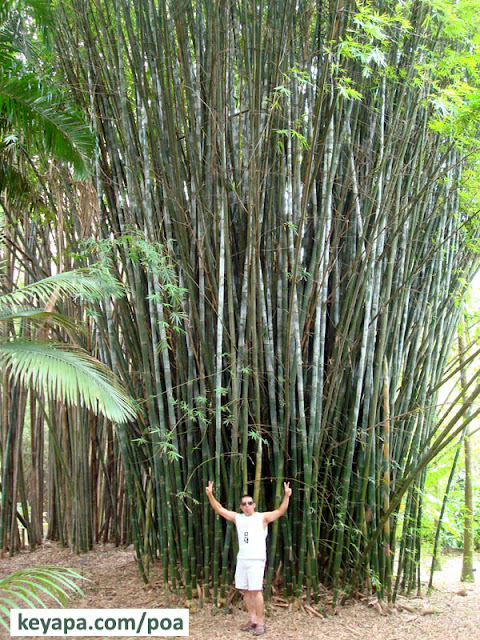 Bamboos are by far the tallest grasses, with the species Dendrocalamus giganteus capable of growing up to 50 m tall. By comparison, the other grass subfamilies can only boast of species like Arundo donax, which tops out at around 6 m tall.
So how do bamboos accomplish this feat?

Researchers have found that the maximum height of tall plants is limited by the ability of the plant to pull water up from the ground to supply the highest leaves. The water column is drawn through xylem vessels, which are the specialized tubes that transport water in plants. When the cost of supplying water to the leaves is higher than the photosynthetic benefits given by those top leaves, then the plant ceases to grow taller.

But that's not the entire story.
In addition to gravity, tall plants also have to deal with cavitation, which involves air bubbles forming in the xylem vessels and preventing the water from being drawn up. The formation of such embolisms is a daily occurrence, and can have fatal consequences when the problem is not fixed. In dicot trees which can grow larger in diameter, one solution is for the tree to simply produce more xylem as old ones become non-functional.
But bamboos cannot produce new xylem to replace older ones that have been filled with air bubbles, so researchers tried to determine how bamboos solve this problem of cavitation, which would be a serious limitation on how tall they can grow. 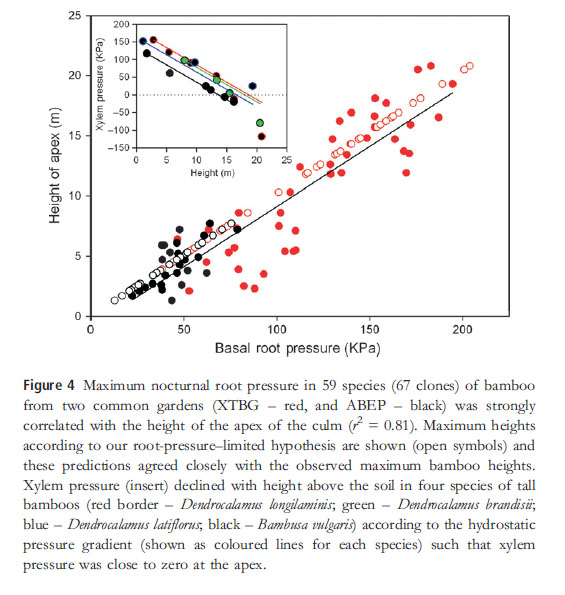 What they found out was something surprising.
They discovered that bamboos repair any embolisms that occur during the day by closing their stomata at night then using  pressure generated from their roots to dissolve the air bubbles back into solution! The root pressure is generated by actively pumping ions and causing water to flow into the roots as it follows an osmotic gradient.
Even more surprising, they tested 59 species of bamboos and measured the heights of the grasses as a function of their basal root pressures, and they found out that  there was a strong correlation between the two values. The higher the root pressure generated, the taller the bamboo.
So it seems that in bamboos at least, the maximum height of each species is directly related to the ability of that species to generate higher root pressure! The greater the ability of the species to generate high root pressure, the higher its potential maximum height.
Reference
Cao KF, Yang SJ, Zhang YJ, Brodribb TJ. The maximum height of grasses is determined by roots. Ecol Lett. 2012 Jul;15(7):666-72. doi: 10.1111/j.1461-0248.2012.01783.x. Epub 2012 Apr 11. PMID: 22489611.
at November 21, 2020 No comments:
Email ThisBlogThis!Share to TwitterShare to FacebookShare to Pinterest
Labels: Bamboo, Research

The beauty of grass flowers

Grasses have almost always been relegated to the bottom of the pack when people marvel over the beauty of a plant's flowers, or the magnificence of its leaves. Indeed, many botanical blogs and youtube videos seem to gloss over the presence of members of this most important plant family. In one particular video, the host focused exclusively over some minor forbs, while all around him the gorgeous reddish hued stems of Schizachyrium scoparium waved in the gentle breeze!
This is mostly because the inflorescence of grasses have no sepals or petals, and the flowers themselves are mostly minute and specialized for wind pollination. They are thus easy to ignore in the presence of plants with much larger flowers or large complex leaves.

Nevertheless, many grasses are simply stunning when someone takes the time to really appreciate their beauty through the lens of a camera. Examples of this hidden beauty can be seen in some of the macro shots I have taken of the inflorescence of various grasses.

Witness the purple-hued Pennisetum setaceum, or the gorgeously attired spikelets of Schizachyrium scoparium, whose reddish anthers and stigma dangle from tightly closed glumes.

Or stare in astonishment at the purplish inflorescence of Hordeum jubatum, which looks like the tail of some fanciful faerie tale creature, while the attractive white flowers of Phalaris arundinacea welcomes the visits of enthusiastic hoverflies.

And what can anyone do but marvel at the strange spikelets of Calamagrostis acutiflora, which look like futuristic streamlined spaceships! ;-)