It's no secret that there are many endangered species among plants, but I was still surprised at how many are threatened by habitat destruction, invasion, and other anthropogenic factors.
The International Union for Conservation of Nature (IUCN) is the global authority on the status of the natural world and the measures needed to safeguard it. This organization maintains a publicly accessible database of species which have been evaluated called The Red List, which you can view here.
In this database, they have categorized species based on several criteria and grouped them according to their risk of extinction. For those species where enough data is available, the categories include:

I was reading about an endangered grass  in California, and this prompted me to see how many grass species are lumped into this bucket. So I took a look at the absolute numbers of grass species in the Red List database, subtracted those species which have not been fully evaluated (a grouping called  Data Deficient in the IUCN), and calculated percentages for each of the categories listed above.

It turns out that a bit more than 20% of the Poaceae species in the database that have adequate information are Threatened, which was a number that seemed a bit high to me.

But imagine my surprise when I decided to look at other plant families.

More than 50% of the species in the Orchid, Daisy, Palm, and Cycad taxa are Threatened, with the Aroids coming up to that percentage as well (45%). Indeed, an amazing 63% of Cycads are in the Threatened category! These are shocking numbers to me, and they shine a light on the need for more action in terms of preserving our plant biodiversity.

But before you go into full panic mode, it should be noted that there are caveats to the numbers calculated above.

For example, although the estimated total species in the family Orchidaceae is around 30,000, only around 1400 are listed in the Red List with enough data to make a judgement call on their status (approx. 5%). In the case of the Araceae, only around 7% of the 3700 species worldwide have been fully evaluated, although almost half of that 260 species of Aroids are listed as Threatened.

However, balancing this is the fact that in some taxa, most of the species are already included in the database. For example, it seems almost ALL 300+ species of Cycads in the world are already listed in the Red List, which means these plants are really in dire straits, given that more than 60% are Threatened.

2. There might be a slight bias in the species included in the database towards those that are in peril already. That is, researchers might tend to focus on plants that they believe are in trouble when there are very large numbers of species in the world.

Thus, as more information is gleaned and more species are entered into the database, it is expected that the percentage of  Threatened species will drop lower.

Nevertheless, such data serves as a warning to us to be ever vigilant in protecting our plant biodiversity.

at January 30, 2021 No comments:
Email ThisBlogThis!Share to TwitterShare to FacebookShare to Pinterest
Labels: Biodiversity, Research

Humanity's rise as an intelligent species, and one that today dominates the world, would not have been possible without the grasses. Not only did our species develop in the savannahs those traits that mark us as Homo sapiens during the time when grasslands spread throughout the world, but our very civilization would not be possible without the domestication of various grass species, including wheat, maize (corn), and rice.
The latter of this Big Three directly feeds more than half the people on earth, and was thought to have been domesticated twice, once as Oryza sativa in the Yangtze Valley of China more than 9000 years ago (Molina et al, 2011), and another time  in Africa in the inland delta of the Upper Niger River as Oryza glaberrima between 2000-3000 years ago (Linares, 2002). Amazingly, there is now recent evidence that rice (as a wild Oryza sp) was domesticated in a THIRD continent about 4000 years ago, this time by the mid-Holocene residents of the Monte Castelo shell mound in the Amazon regions in South America (Hilbert et al, 2017)!
Such a tight relationship between humanity and this grass genus would surely mean both benefit greatly from the association, and in fact its mutualistic relationship with people has made rice one of the most common plants in the world. But you would be mistaken to think that all rice has become soft and meek and domesticated. 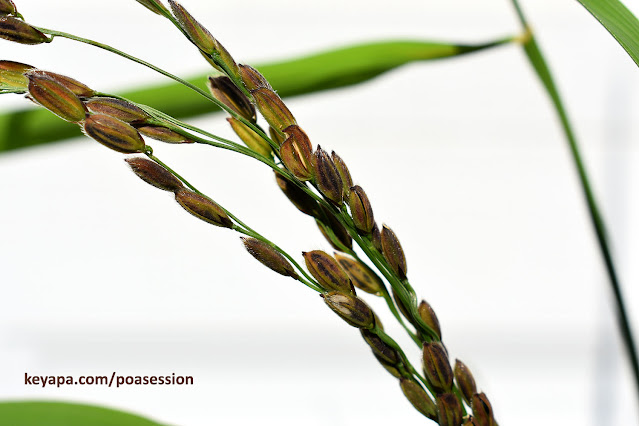 There are rebels in the midst of the rice paddies, and their effect on the productivity of the Empire of Man is surprisingly substantial. Some estimates put crop losses due to this rebellion at more than 90% in some fields, and in the USA up to 30% of rice fields can be compromised, leading to more than $50 million in annual losses.
These weedy rice have characteristics that differentiate them from their still-domesticated brethren. For example, domesticated rice has non-shattering seedheads, which simply means that the grains do not have a tendency to break off from the plant and scatter. This makes it easier to harvest and prevent significant losses of the crop. In the case of the weedy rice, easy shattering of the seedheads means the rice gets to disperse its seeds, which is obviously the usual goal of any species.
Another example of a trait that these rebellious rice have gotten is seed dormancy, which allows them to stay dormant in the soil until conditions are optimal for seedling growth. Such a trait has been taken out of their more domesticated compatriots because farmers tend to collect the seeds of plants that don't have dormancy.
One interesting thing about these rebellious rice is that not only were they derived from different varieties of rice, but that they arose during different periods of the domestication and improvement history of rice. The way researchers discovered when each weedy rice broke off from being domesticated was by looking at what types of genes they have in common with the domesticated type (Lin-Feng et al, 2017).
How does that work?
Well, remember that as rice developed over the centuries and millennia, it acquired various domestication genes (e.g. genes for non-shattering seedheads), followed by various improvement genes (e.g. popcorn taste, nice aroma, etc). So for example, if rebel rice #1 has the genes for domestication, but not the improvement genes, whereas rebel #2 has both genes for domestication and some improvement genes, then the researchers can deduce that rebel #1 broke off earlier than rebel #2 during the history of rice. In the image above, the BHA (black hull awned) weedy rice diverged earlier in the process than the SH (straw hull) weed.
"But wait!" You might ask. "If they still have the domestication and improvement genes, then how were they able to get all those weedy traits?"
It turns out that these weeds modified other genes to re-acquire the weedy traits  (such as re-enabling shattering of seedheads), and these genes are not scattered throughout the genome but tend to cluster into genomic islands. These genomic islands that re-create similar weedy characteristic are completely different for each weed type, which means that each rice weed evolved the weedy traits independently using different methods.
Amazingly, it seems rice has a tendency to rebel against domestication, and it repeatedly evolves gene islands that allow it to break from its "chains of slavery"!
How totally ungrateful! *smh*
Literature Cited
Hilbert, L., Neves, E.G., Pugliese, F. et al. Evidence for mid-Holocene rice domestication in the Americas. Nat Ecol Evol 1, 1693–1698 (2017). https://doi.org/10.1038/s41559-017-0322-4
Lin-Feng Li, Ya-Ling Li, Yulin Jia, Ana L Caicedo, Kenneth M Olsen. Signatures of adaptation in the weedy rice genome. Nature Genetics, 2017; DOI: 10.1038/ng.3825
Linares, Olga F. (2002-12-10). "African rice (Oryza glaberrima): History and future potential". Proceedings of the National Academy of Sciences. 99 (25): 16360–16365.

at January 29, 2021 No comments:
Email ThisBlogThis!Share to TwitterShare to FacebookShare to Pinterest
Labels: Oryza, Research, Rice

A time for new planting


In many parts of the world the time for planting new crop is one of hope and joy. It is a symbol of renewal, and the promise of an even better future.
The unlucky Year of the Rat will not end until February 12 (when it will be replaced with the Year of the Ox), but already there has been much rejoicing in the USA. The long night under a leader who did not really care about the environment and disparaged science is finally over.
Here's to hoping that the new seedlings that we are planting today grow up strong and true, and that they yield a rich and bountiful harvest in 2021.
at January 20, 2021 2 comments:
Email ThisBlogThis!Share to TwitterShare to FacebookShare to Pinterest
Labels: Art and Culture, Politics

You reap what you sow

"If we enable people in power to lie, you all of a sudden have millions of people doubting an election that was certified in every state. We had seven or eight million more people who voted for [Joe] Biden than for [Donald] Trump. Every state has certified those results. Every court appeal has been turned down. A legitimate election is suddenly questioned by millions of people, including many of the people who are leading our country in government, because we've decided over the last few years to allow lies to be told. This is who we are. You reap what you sow."