Fat leaves and thin leaves: How they can tell us where grasses evolved

I hike a lot, and many of the places I hike into are in forests and woodlands, so it's no surprise that I've become somewhat familiar with the grasses that inhabit the shaded interior of these forested environments.

One thing I have noticed is that the denizens of these habitats tend to have wider leaves compared to species that live out in the open, and I just read a paper that used this fascinating fact to try to resolve the evolutionary origins of the family Poaceae.

The evolutionary origins of grasses are still under intense study, but differing hypothesis place their original habitat either in forest interiors, in the open, or in forest margins. A new study sought to delineate these options by looking at the various leaf shapes in grass species (Gallaher et al, 2019). Forest grasses it turns out, do tend to have wider leaves than those species in the open, but unfortunately such changes in leaf shape might also be affected by other factors, such as climate and the photosynthetic pathway used by each species (whether C3 or C4).

In order to determine how various factors influenced leaf shape and size, the study generated phylogenies for 578 grass species representing all the Poaceae tribes and subtribes, and approximately 75% of all grass genera. Leaf shape for the various species in this phylogeny was then correlated with precipitation, solar irradiance, temperature, photosynthetic pathway, and habitat.
They found that leaf shape in the grass family was strongly correlated with the habitat of the species, and that leaf shapes across the entire family converged towards certain shapes becoming associated with specific habitats. So for example, open habitats tended to have grasses with linear leaves, and ovate leaves tended to be present in grass species in the forest understory. Meanwhile, species that lived in forest margins tended to have lanceolate leaf shapes, an intermediate form between the shadier forest interior and the more open plains. They also found out that leaf shape is not strongly related to all other variables, whether it be temperature, precipitation, solar radiation levels, or even photosynthetic pathway. In addition, they noted that grasses have smaller leaves in open and drier areas, and in areas with high solar irradiance.
Interestingly as well, they noticed that the evolution of leaf shape closely tracked habitat changes over the course of grass evolution, and their estimates placed the forest understory as the most likely ancestral habitat of the grasses. Looking within the family, they found that the most probable habitat of the bistigmatic clade, core grasses, BOP clade, Oryzoideae, and Bambusoideae was forest margins, while the crown node of the Pooideae was either derived from open areas or the forest margins,
In addition, they estimated that there were between 12 to 41 transitions by grasses in the move to open habitats over evolutionary time, and all of them were from forest margins. This highlighted the importance of the forest margin ecotone as a launchpad to the eventual diversification and movement of many in the family to having more linear leaves as an adaptation to open environments. Linear leaves are advantageous in these less restrictive habitats because they allow faster heat loss to avoid damage to leaf tissue, as well as help prevent mechanical damage due to wind and other stresses.
All these changes in leaf shape as grasses moved from the forest margins to open habitats occurred in the Cretaceous or Paleocene, which was long before the first signs of grass-dominated ecosystems in the Eocene, and the eventual dominance of grasslands beginning in the Miocene.
So the next time you are hiking, take note of the grasses and how their leaf shapes tracks the environment, and marvel at the evolutionary changes that allowed this family to escape the shadier environments of the forest to eventually claim dominance of the wider open spaces.
Literature Cited:
Gallaher, T.J., Adams, D.C., Attigala, L., Burke, S.V., Craine, J.M., Duvall, M.R., Klahs, P.C., Sherratt, E., Wysocki, W.P. and Clark, L.G. (2019), Leaf shape and size track habitat transitions across forest–grassland boundaries in the grass family (Poaceae). Evolution, 73: 927-946. https://doi.org/10.1111/evo.13722
at May 30, 2021 No comments:
Email ThisBlogThis!Share to TwitterShare to FacebookShare to Pinterest
Labels: Research

Ya picked the wrong plant to mess with pardner!

Iris pseudacorus (Yellow Flag Iris) is a non-native that is found in semi-aquatic and aquatic habitats throughout North America. It is an attractive plant with yellow flowers that nonetheless can use its rhizomes to form dense monotypic stands that displace other plants in the area.

I was interested in the fact that the species co-existed with Phalaris arundinacea (Reed Canary Grass) along the shores of a nearby pond, and I have been watching the two species grow quickly this Spring.

There are large groups of Yellow Flag Iris around the pond, but the one I was interested in sat right next to and behind a big stand of Reed Canary Grass, their respective ramets almost intermingling with one another.
The Iris seemed to have sprouted tall earlier than the grass, but the latter quickly made up the difference and at this time is more than double the height of its erstwhile competitor.
Both species are weedy invasives, and both have been known to aggressively outcompete and take over wetlands and other semi aquatic and aquatic environments. So I am very much interested in how the meeting between these two plants will resolve itself over time.
One thing I already noticed is that the Yellow Flag Iris clump next to the grass seems to be smaller than the one farther away, and have yet to bloom while their brethren have already pushed out their yellow flowers. But perhaps this is simply because that group is younger, and not because of competition from the Reed Canary Grass.
On first glance, the much larger P. arundinacea seems to be the clear favorite. I can almost see it looking at the Iris and saying "Hmmmmm...ya picked the wrong plant to mess with this time pardner!"
But there are reports that show allelopathic activity in Yellow Flag Iris, and it is fairly common in the plant world for seemingly innocuous smaller plants to be the more aggressive and successful competitor, so I will definitely be looking with interest on this spot over the summer.
at May 18, 2021 No comments:
Email ThisBlogThis!Share to TwitterShare to FacebookShare to Pinterest
Labels: Invasive, Phalaris

A rare flowering of Japanese Blood Grass - that isn't so rare after all... 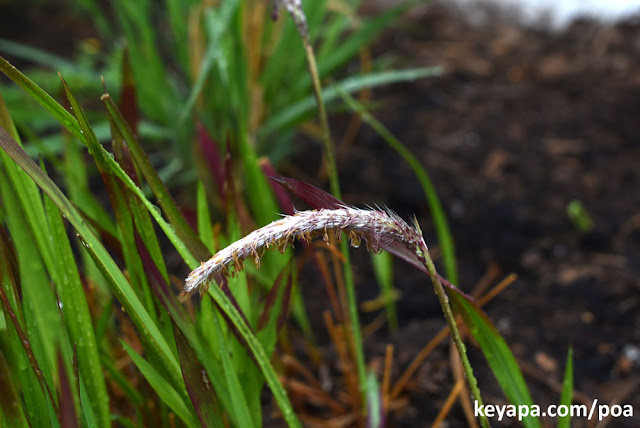 Last year I posted about the flowering of my ornamental Japanese Blood Grass (Imperata cylindrica), and noted that such flowerings were supposedly very rare.
Interestingly enough, I was surprised to find that the same cluster of JBG had again flowered this year (and at about the same date!), with 2 flowerheads coming out of some of the more peripherally positioned ramets. 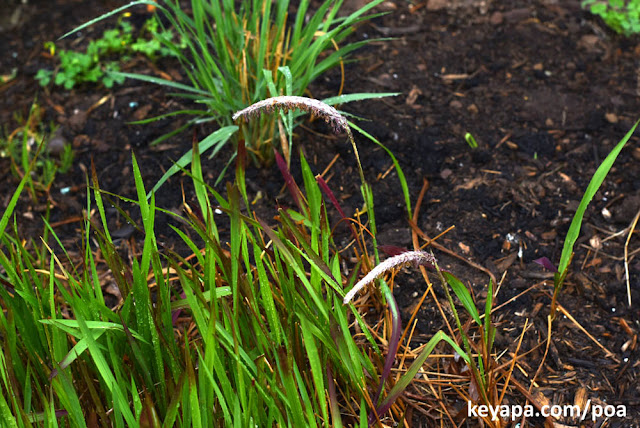 The flowerheads were already a bit spent, and the drizzle that caused them to droop under the water load did not help when I first saw them, but there was no question that flowering of JBG may not be so rare after all. Although perhaps some unique environmental condition in that cluster's location is causing this annual flowering, it's certainly unusual for this to happen (according at least to reports on the web). 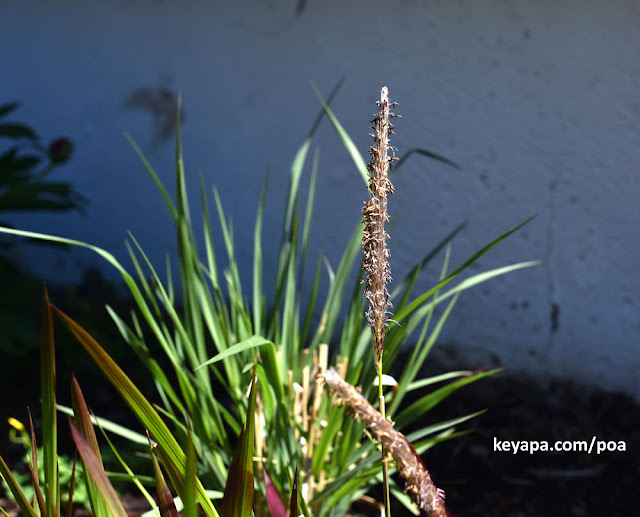