How an Invasive Grass Secretly Spread and Eluded Eradication

The insidious invader first came to light in 1996, in Patapsco State Park in Maryland, and by 2004 it had leapt into the next state and was discovered infesting a large area in Virginia's Shenandoah National Park. Efforts to eradicate it while it had a limited distribution began in earnest, but fifteen years later, it had spread to thousand of hectares in Maryland, Virginia, and even one spot in Pennsylvania.

The ability of Oplismenus undulatifolius (Wavyleaf Basketgrass) to defeat all efforts to halt its advance was likely due to several factors.  The first is its long lived perennial nature, an attribute different than a congener, the also invasive Microstegium vimineum (Stiltgrass). This allows it to push up from thick litter every year using well developed roots, unlike the latter, which has to germinate from more vulnerable seed every year.
The second factor is the ability of this understory species to thrive in very dim light. One study found that it could still grow in as low as 2-11 mols m2 per day of light. This allows it to exist within the forest interiors, and thus escape the attention of many biologists and others who usually do not wander far from trails.
The third factor which allowed Wavyleaf Basketgrass to thwart attempts to contain and eliminate it was a characteristic that was in full display when I chanced upon a small cluster of this invader near Shenandoah National Park yesterday.
I saw what looked to be tiny beads strung along 5 to 10 cm spikes that shot out from the masses of wavy leaves. Each bead was perhaps 1 or 2 mm in diameter, with sharp awns projecting from them.
When I used my macro lens to view the beads, I suddenly realized these were flower and seedheads!
Under the macro lens, the spikelets of this grass looked like alien spaceships, with the awns decorated with beads of liquid.
It turns out that O. undulatifolius disperses its seeds using unwitting animals, with the sticky liquid enabling them to attach to the fur or shoes and socks of passing fauna. Wavyleaf Basketgrass is a prolific producer of these sticky seeds, with dense stands developing more than 6000 seeds per square meter every year. It is such a profligate invader that Prof. Vanessa Beauchamp found that a dog running through this grass could pick up 12000 or more seeds on its fur! People are also used as vehicles for dispersal, with one study showing that around 800 seeds adhered to fleece within 30 seconds, while even denim pulled in around 300 seeds within the same timespan! 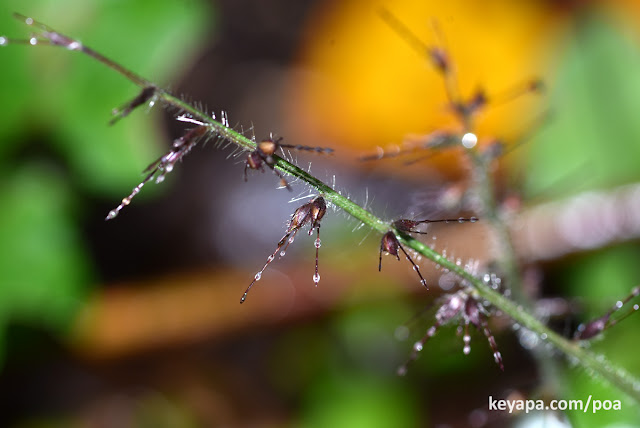 Given all these attributes, it is certainly understandable why all attempts to eradicate the invasive grass have so far proven futile. But if you are out hiking and find this, then be sure to report the find in order for us to at least contain it.
Click for information on how to identify it.
References
Beauchamp, Vanessa B.; Koontz, Stephanie M.; Suss, Christine; Hawkins, Chad; Kyde, Kerrie L.; Schnase, John L. (2013). "An introduction to Oplismenus undulatifolius(Ard.) Roem. & Schult. (wavyleaf basketgrass), a recent invader in Mid-Atlantic forest understories". The Journal of the Torrey Botanical Society. 140 (4): 391–413.
Peterson, P.M., E.E. Terrell, E.C. Uebel, C.A. Davis, H. Scholz, and R.J. Soreng. 1999. (Scientific Note) Oplismenus hirtellus subspecies undulatifolius, A new record for North America. Castanea 64:201-202.
at October 18, 2021
Email ThisBlogThis!Share to TwitterShare to FacebookShare to Pinterest
Labels: Invasive, Macrophotography, Oplismenus