Update on the rapid expansion of an invasive grass 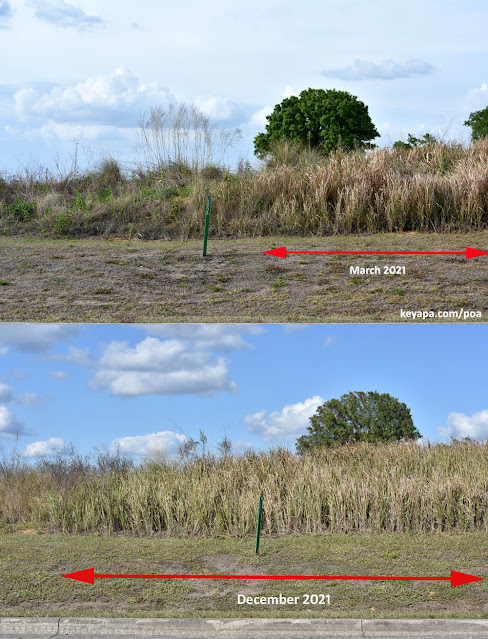 Almost a year ago, I documented the rapid expansion of an invasive grass. I used Google Street View to show that a cluster of Imperata cylindrica (cogongrass) was expanding at more than 7 meters per year along the east-west gradient of a public roadway.  At the time, I also noted that one end of the dense stand of cogon grass had reached an optical cable marker.

I visited the same spot again last week (approximately 9 months later) and discovered that the invasive had expanded even farther out, with the line petering out almost 6 meters west past the marker. This new measurement confirmed that the stand is moving at a relatively even pace of between 0.6 to 0.7 meters per month on one end.

I cannot imagine that such methodical and uniform growth can persist against the variety of other species and obstacles the cogongrass encounters, but I will be sure to visit this cluster again in a year or so to see whether I'm proven wrong.

at December 30, 2021 No comments:
Email ThisBlogThis!Share to TwitterShare to FacebookShare to Pinterest
Labels: Imperata cylindrica, Invasive

A Grass among the Sea Wrack

I was strolling along Coligny Beach in Hilton Head Island, SC when I came upon washed up organic debris that looked like grasses. Up to that point, the most interesting thing I had seen were the empty carapaces of horseshoe crabs.
Much to the annoyance of the wife I took some time examining what I found. 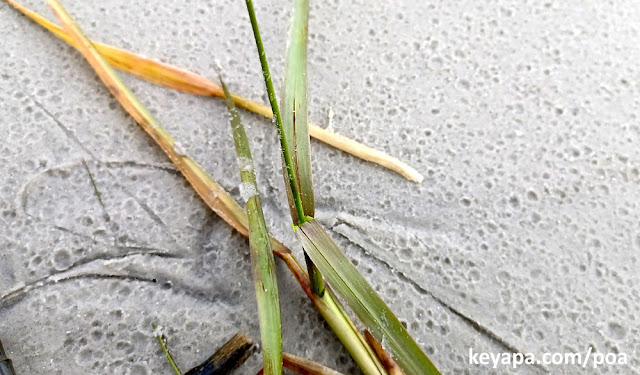 I've  always been interested in drift seeds and drift fruits, which are carried by ocean currents far from their points of origin and deposited by the tides on beaches, where they may have a chance to root and flourish. If you walk beaches often, you'll notice that a line of organic and other "debris" line the sand during the day, and an entire culture of so-called "beaners" comb these sea "wrack" for seabeans and other hidden treasures.
I don't believe grasses are common in such sea wracks, although there have been cases of masses of dead and dying Phragmites australis washing up to litter beaches in the northeast. The putative grasses that I found were composed of broken and intact culms, with attached fibrous roots and even rhizomes. I at first thought they were palm fragments, but the culms actually look similar to those of Saccharum officinarum (sugarcane) or some small bamboo. 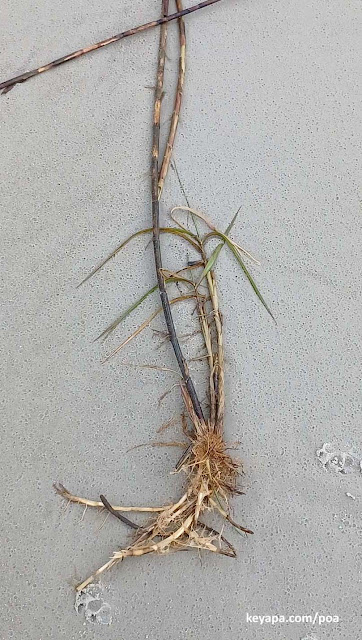 There are of course various dune grasses at the beach, especially Uniola paniculata, which lined the dunes that fronted the whitish sand. But the many fragments I found at the wrack were not this species, nor one of the other dune grasses that I have found.
I also marveled at the fact they seemed to be trying to sprout in the sandy beach, although I doubt anything would come of it. I can only imagine that some storm inland had washed these pieces into a river, from whence the grass fragments had been carried into the open ocean.
I'd love to figure out the identity of the plant, and determine whether they actually will be able to somehow root in the beach, unlikely as that possibility may be. The notion of live grass fragments being carried long distances along the ocean currents to distant shores, on which they can start up a new and thriving population, is really quite fascinating.
at December 24, 2021 No comments:
Email ThisBlogThis!Share to TwitterShare to FacebookShare to Pinterest
Labels: Uniola

I have touted the use of Google Street View as a way to view the behavior of grasses over time. I did this with the invasives Neyraudia reynaudiana (burmareed) and also Imperata cylindrica (cogongrass). In both of those species, Google Street View showed an expansion of the grass as the years passed. 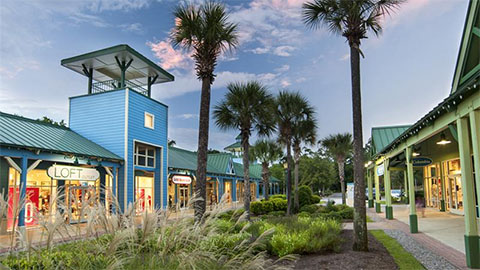 When I visited the Tanger Outlets in Hilton Head, South Carolina a few days back, I noticed the presence of "escaped" ornamental Cortaderia selloana (pampasgrass) along the roadsides. This species is heavily used in the southeastern states, and the fact that some may have escaped from cultivation was not entirely a surprise. One stand in particular southeast of the outlet had a dense cluster of the invasive.

When I used Google Street View to look at the same area in the past (coordinates 32.237168,-80.8178924), I did not anticipate seeing this same stand years back, but imagine my surprise when I went all the way back to 2013 and the same exact cluster of C. selloana seems to have been in the same spot!

This seeming stability in pampas grass is interesting because like many grasses it has rhizomes which can aggressively push its way into new territory. Perhaps in this case the surrounding vegetation or environment is not conducive to its spread, or perhaps the last 7 or so years is not enough time to see major changes. When compared to cogongrass especially, such slow expansion is curious, and it would be interesting to find more instances of other escaped ornamentals and see whether this slow rate of expansion is normal.

at December 21, 2021 No comments:
Email ThisBlogThis!Share to TwitterShare to FacebookShare to Pinterest
Labels: Cortaderia, Invasive

First Report of a Succulent Grass with CAM Photosynthesis


The Poaceae as a whole are about equally divided between those that use C3 photosynthesis, and those that have the C4 version of photosynthesis, which is more energetically costly, but which allows the plants to be more productive in hot and arid environments.

In C3 plants, which are the vast majority of plants in the world, CO2 is directly fixed into a 3-Carbon compound by the enzyme RuBisCo in the Calvin-Benson cycle. Unfortunately,  RuBisCo can use both O2 and CO2, and when a C3 plant closes its stomata in order to conserve water in hot dry environments, more O2 is used, which leads to a let loss of carbon in the plant. In fact, some calculations show that C3 plants could end up wasting up to 40% of absorbed energy due to photorespiration!

C4 plants solve this problem through a carbon-concentrating mechanism. They have a modified leaf anatomy wherein CO2 is first fixed onto a 4-carbon compound in outer mesophyll cells by an enzyme not affected by O2, before being shunted to inner bundle sheath cells, where it is converted back to CO2 for use by RuBisCo in those cells.

CAM plants are also adapted to hot and dry environments, and they also initially fix CO2 into a 4-carbon compound. In their case, they keep their stomata close during the heat of day, then open them at night. The CO2 that comes in when the stomata are open are fixed into a 4-carbon compound by the same enzyme used by C4 plants, then shunted into a nearby vacuole, where they remain until needed to complete carbon fixation during the daytime. So in the case of CAM plants, they concentrate carbon by separating the process temporally, instead of spatially like C4 plants do.

The Poaceae recently became one of only 8 families of plants that have members using all 3 different photosynthetic methods, with the single grass species that exhibits CAM metabolism able to use both C4 and CAM.

Spinifex littoreus is a halophyte with thick, stiff leaves that is found on coastal sand dunes in East Asia. It has been reported as a C4 plant, with all the concomitant structural modifications for this pathway, but a relatively new study showed evidence that it may also be undergoing CAM metabolism.

Measurements confirmed that the leaves of this species are succulent, which is usually correlated with CAM plants. In addition, the researchers found diel fluctuations in leaf acidity, with acidity rising during night, another clue that it is using CAM photosynthesis.

If true, S. littoreus is the first grass ever exhibiting CAM, and it will be joining members of the non-grass genus Portulaca as the only plants that can do C4/CAM cycling.

at December 12, 2021 No comments:
Email ThisBlogThis!Share to TwitterShare to FacebookShare to Pinterest
Labels: Research, Spinifex


I listen to podcasts whenever I walk out for exercise.

My favorite podcast would be In Defense of Plants, but I also listen to paleontology related podcasts, and a few days ago I came upon a series hosted by two researchers that is both entertaining and informative.

This episode of Common Descent was extremely interesting because it featured my fav plants - grasses! The guest speaker, Dr. Aly Baumgarter does a good job of giving an overview of the evolution of grasses and their expansion during the last few million years, a topic which I will be tackling as well in future posts.

at December 07, 2021 No comments:
Email ThisBlogThis!Share to TwitterShare to FacebookShare to Pinterest
Labels: podcast 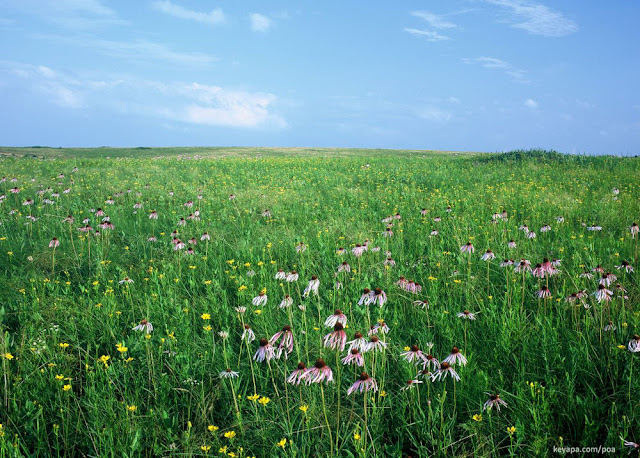 The ability to sequester and store carbon in a manner that will reliably prevent it from pouring back into the atmosphere is essential in our fight to slow global warming and climate change.

Intact and ancient old growth grasslands are our best weapon in this fight in many parts of the world, due to several factors that allow it to more safely store carbon underground compared to forests and degraded secondary grasslands.

What are some factors in our changing climate that affect the reliability of carbon sequestration and storage?

There are two main factors that are increasingly being affected by climate change, and they are wildfires and drought.

What characteristics allow grasslands to sequester and store carbon more safely and reliably when compared to forests?

The increasing probability of drought and wildfires influences the ability of different ecosystems to reliably sequester and store carbon. Although primary forests are essential to our world and also need to be protected, misguided afforestation efforts that destroy ancient grasslands is on the rise, often with disastrous consequences (e.g. planting trees where they cannot survive, or even worse, creating invasive commercial monoculture plantations).

Why are ancient Old Growth Grasslands better than secondary degraded grasslands in our fight against climate change?

Why do we need to emphasize the importance of ancient grasslands in our quest to mitigate climate change?

We need to continue to strongly advocate for the preservation of ancient old growth grasslands, not only because of their continued destruction at the hands of land developers, but also because of misguided afforestation efforts around the world. Many of these grasslands originated thousands and even millions of years ago, long before the rise of humanity. We owe it to the future to preserve them and the countless animals and plants that make it their home, and in the process help combat climate change.