A Nice Lazy Sunday with the Wiregrass Aristida beyrichiana

It was a chilly but very sunny Sunday yesterday, and I decided to go visit the Disney Wilderness Preserve. I always enjoy exploration trips, so macro lens and camera in hand I made the short drive to what I consider one of the more well maintained and preserved hiking parks in the state.

When I visited there last, the most visible parts of the understory included Andropogon spp, as well as the palm Serenoa repens. I also saw several large specimens of what I believe is Muhlenbergia expansa. But this time I took a closer look at the surrounding vegetation as I made my way along the trail and to my absolute delight discovered what I took to be clusters of Aristida beyrichiana (aka Aristida stricta var beyrichiana), many of which had developing or spent inflorescences. 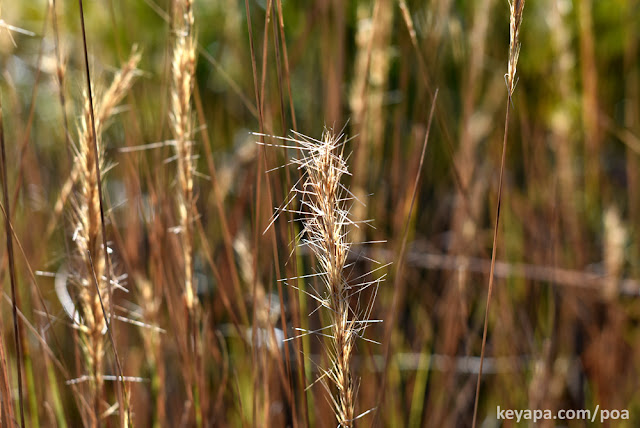 The grasses were not tall, perhaps up to half a meter in height, though the seedheads pushed some of them close to a meter. But the yellowish brown inflorescences were quite distinctive amongst the brown remnants of the other grasses and I had no problems at all finding my quarry.

Under my macro lens the distinctive 3 awned Aristida spikelets looked like cactus spines. The awns project out of the lemma, and in A. beyrichiana twist and turn along their lengths. In fact as the seedheads dry they reminded me of twisted barb wire, which is quite apt given that one of the common names of A. beyrichiana is "wiregrass" (although the term commonly refers to the thin wiry leaf blades).

As I continued along the trail, more and more of the clusters of wiregrass had older and completely stripped seedheads. This might have been because various areas of the path had been burned at different times, which might have influenced the growth and flowering times of the specimens in each location.

I had been so focused on photographing the clusters that I suddenly realized that 3 hours had already passed, and it was almost time for the park to close. I had to hurry and jog back to the visitor center, but I was exhilarated by all the plants that I had found, and I drove home with a big smile on my face.
I love this native grass!
at January 31, 2022 No comments:
Email ThisBlogThis!Share to TwitterShare to FacebookShare to Pinterest
Labels: Aristida

We were hiking in the Disney Wilderness Preserve, which is managed and owned by the Nature Conservancy, when we came upon blackened areas along the trail, and my wife wondered whether those were accidental fires. When I told her that these were probably set deliberately, she was at first doubtful and I had to explain the rational behind it.

Unfortunately, many people likely would have the same incredulous response to the notion that people would intentionally set fires to pristine areas. But in fact, fire is a natural part of many ecosystems, and it is a major factor in maintaining the integrity and health of the wiregrass-long leaf pine savannas that are the pride of Florida.

These savannas are characterized by having a relatively open canopy of long leaf pine (Pinus palustris), a sparse or absent midstory, and an understory dominated by bunch grasses composed mainly of Aristida beyrichiana (synonymous with A. stricta var beyrichiana) and various Andropogon species. Without a relatively frequent fire regime (2-3 years) to remove other species, the area will slowly be converted to a less diverse closed canopy forest.

The foundation of this habitat is A. beyrichiana (wiregrass), a perennial C4 grass which normally only flowers after fire during the growing season. It is an obligate pyrogenic species, and A. beyrichiana and the other native bunch grasses provide the fine fuel that makes this habitat possible by keeping tree density low and light levels high. If fire is actively excluded from an area, this species slowly disappears from the landscape, probably due to competition or the growing leaf litter, and its loss will negatively impact the entire ecosystem and might ultimately result in its disappearance. Wiregrass is thus essential if you want to restore any degraded wiregrass-long leaf pine habitat.

Fortunately, studies have shown that even after fire exclusion for decades, this species is resilient enough to start flowering again after a fire (Fill et al, 2021; Shearman et al, 2019). This gives hope that it will be possible to restore degraded wiregrass-pine savannas back to their pristine condition with the start of a regular fire regime. But in order for us to continue to maintain these precious habitats, we must change our widely held view that fire is always bad.

People need to rethink the way they view fire in nature, and realize that fire is a natural part of the system that helps maintain beautiful and unique habitats like the wiregrass-pine savannas of the southeastern USA.

Spread the word if you can.

at January 29, 2022 No comments:
Email ThisBlogThis!Share to TwitterShare to FacebookShare to Pinterest
Labels: Aristida

The fascinating foraging and behavioral specialization of clonal grasses

Social insects display a range of behavior that has long been of interest to researchers. For example, ant colonies send out scouts to search for food and bring it back to the mother nest, and many species display worker specialization at the behavioral and even physical  level.

Amazingly, some types of grasses (and other plants) that are clonal and spread laterally via rhizomes or stolons display behaviors that are just as fascinating and almost analogous to that seen in these social insects. Grasses that spread through the use of horizontal stems (called rhizomes if the stem is underground, and stolons if the stem if aboveground) produce genetically identical clones that are each called "ramets". These ramets are fully developed plants, and will function as complete individuals when separated from the rest of the group if the rhizome or stolon is severed. The entire cluster of genetically identical ramets is called a "genet".

Researchers have found that clusters of interconnected ramets have attributes that cannot be found in non-clonal species. Not only does information flow between the members of the genet, but nutrients and water can be translocated throughout the entire network of ramets. This ability to actively and deliberately move information and other materials is called "clonal integration", and it allows these clonal grasses to withstand stresses in heterogeneous environments that separated individual plants cannot.

As an example, think of a location where one area is partly shaded, but one is sunlit. Since plants cannot move to shift their location, individuals who end up in the less sunlit part will not grow as well. However, a clonal grass with ramets spread across both light gradients will be able to overcome this problem. Remarkably, ramets in the well lit environment will translocate photosynthate to the less fortunate members of the cluster, and studies have shown this does not negatively impact their own growth. In the same way, ramets in soil with rich amounts of needed minerals or water will move any necessary nutrients to other ramets that are located in less favorable locations.  So it actually might be possible to have a situation where a ramet in a well lit but nutrient poor area is both sending photosynthate and simultaneously receiving minerals from a ramet which is in a dimly lit but nutrient rich soil nearby!

This "division of labor" also can happen due to developmental differences in age, and not just due to heterogeneous environments. In some clonal plants, older ramets with extensive roots systems (but which may have almost no above  ground structures left) send nutrients to the younger ramets, which may not have developed extensive roots yet. In return, the younger ramets translocate photosynthate as needed.

Another behavior of clonal grasses which is similar to social insects is foraging. In this case, the genet "forages" in space as it produces new ramets around it.  When it encounters an area that is optimal (for example, it is well lit), it concentrates the production of new ramets in that location, usually by decreasing the internode length of its rhizomes or stolons so the density of ramets increases. The newly developed ramets can then help support the rest of the genet by translocating photosynthate and nutrients to the cluster.

These range of behaviors displayed by clonal grasses and other plants is absolutely fascinating to me because I am also an observer of social insects.  It reinforces the idea of plants as active participants in the landscape, albeit at a different time scale than short lived animals, and I hope to keep up with research on clonal integration in the future.

at January 17, 2022 2 comments:
Email ThisBlogThis!Share to TwitterShare to FacebookShare to Pinterest
Labels: Research


I bought a DJI Mini 2 drone last year, and when I found a field of flowering Imperata cylindrica (cogon grass) in Orlando, FL a day or so ago, I just had to use the drone to do a fly-by of the beautiful field of flowers.
It's my first fly-by video, so be kind ;-)
I think next time I'll fly the drone lower as this was around 3 m up.

Check it out above!

at January 10, 2022 No comments:
Email ThisBlogThis!Share to TwitterShare to FacebookShare to Pinterest
Labels: Imperata cylindrica

A shimmering angel in the beach dunes

I've  become somewhat familiar with the grasses of the coastal dunes, but during my stay in Atlantic Beach in Jacksonville, FL last week I encountered a new species that really got my attention.

I found the species as lone individual clumps and large clusters from the dune front all the way to the parking lot area. The tallest barely reached a meter in height, and the seedheads were already dry, but their striking golden hued appearance immediately caught my eye.

The grasses had wispy inflorescence that fluttered in the breeze, with the equally slender culms swaying to and fro in unison. To my admiring eyes the scene seemed almost magical, and this was heightened even more when single individuals were bracketed by greenery.

I identified the species as Muhlenbergia capillaris var filipes, and it is a native in the area. M. capillaris is a perennial that typically inhabits sandy areas in barrier islands and coastal woodlands. Its  airy blooms can be various colors, including pink. It is valued as an ornamental, which does not surprise me at all. If you pass by one of the beach communities along the southeastern seaboard of the United States, then count yourself lucky if you encounter this beautiful species. 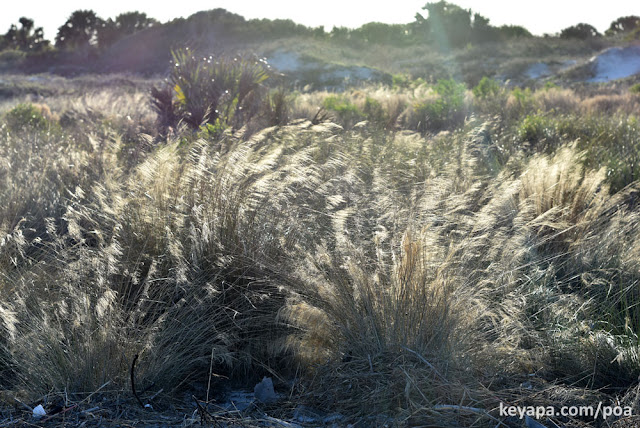