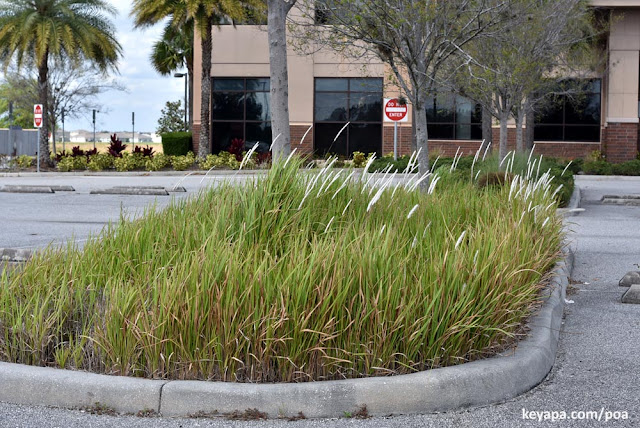 I had to laugh when I saw this parking lot island invaded by Imperata cylindrica (cogon grass).

It really wasn't funny, but it does illustrate the problem faced by people who suddenly find masses of cogon grass in their property.

The persistent rhizomes make it hard to permanently eliminate the species once it encroaches en masse in an area. In this case, I imagine a piece of rhizome (or less likely, a seed?) managed to get into the soil during some activity, and over the years the grass spread throughout the island. Whereas the invaded island was almost entirely covered with the invasive species, the rest of the parking islands with intact flora had healthy looking shrubs and ornamental grasses in them.

Maintenance crews may have simply pulled individual blades out (which would have done nothing to solve the problem), or perhaps even shrugged in defeat and hoped that the invader would somehow blend in with the rest of the plants.

Unfortunately, by delaying any aggressive actions against the invader, they simply allowed it to strengthen its grip on the area, and since cogon grass grows very fast and slowly engulfs other plants around it unless it can be shaded out (impossible in this case due to the open nature of the island) the island now sticks out like a sore thumb when compared to the other islands in the parking lot.
The lesson of this story is that when an aggressive invasive shows itself in an area, don't delay in confronting it or you'll end up paying a much larger price later. 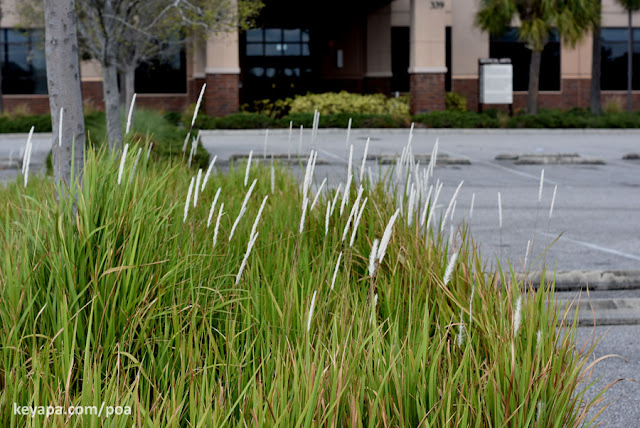 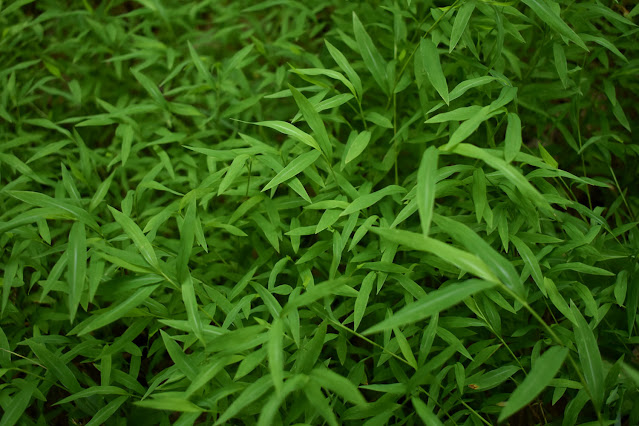 When do you know you think about something way too much? It's when you start dreaming about it!

In my case, I dreamed repeatedly of Microstegium vimineum (Japanese Stiltgrass) last night.

In my dream, there was a hill covered in the small bamboo-like grass, and I was teaching someone how to identify the species by showing them a leaf.

In M. vimineum, a distinctive mark is the silvery midvein on the upper side of the leaves, which you can see by tilting a leaf every which way until the light catches the line. 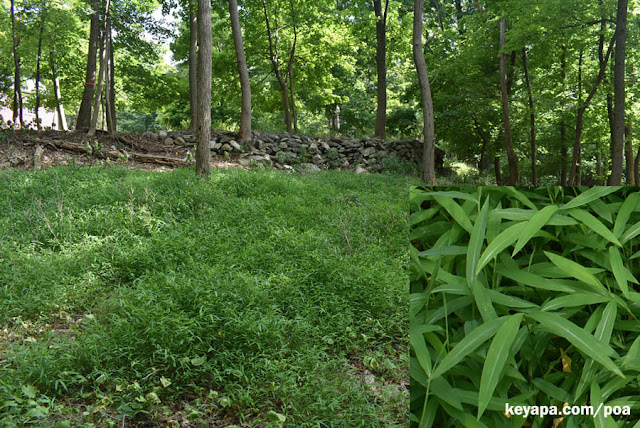 This species is not only interesting because it is a notorious invasive in the East Coast of the USA, but because it is a C4 grass that is shade tolerant, and it's relatively rare that a C4 grass is efficient in shady conditions.

The C4 photosynthetic pathway allows efficient photosynthesis under hot and arid conditions, but the structural changes needed in C4 grasses can make them less phenotypically pliable, such as when placed in shade.

In this situation, some are unable to maintain high quantum yields when grown in low-light conditions. Quantum yield refers to how fast the process works relative to how fast photons are being absorbed. Other C4 grasses cannot take advantage of sunflecks because they cannot maintain a high state of photosynthetic induction (increasing CO2 uptake temporarily when light is temporarily increased). Still others fail to reduce carboxylase in the shade, and thus leaves the photosynthetic enzymes  (PEP Carboxylase and Rubisco) with nothing to do (Sage and McKown, 2006). 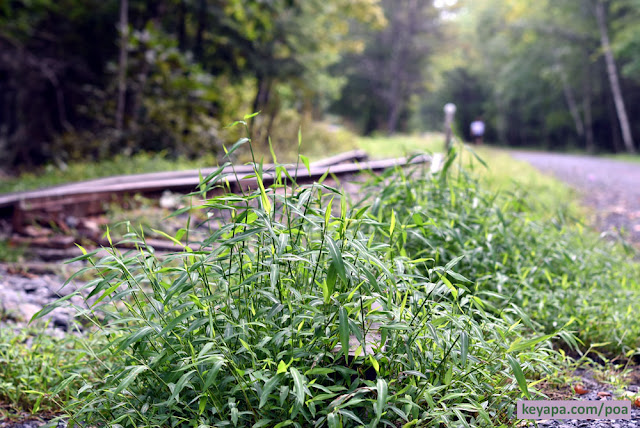 But it turns out that M. vimineum overcomes the limitations of its photosynthetic pathway by taking advantage of sunflecks. A study showed that it is able to rapidly take in CO2 under flashing lights, and then rapidly close stomata in very low light in order to prevent excess water loss (Horton and Neufield, 1998), although the exact mechanisms of this adaptation has not been elucidated.
I know many people hate this species for being invasive, but one cannot help but admire its adaptability, as well as its ability to overcome the seeming limitations of its kind, and perhaps that is why I dreamed of it. I've been watching X Factor UK auditions on YouTube recently  (don't ask!), and I was awed by the passion and abilities of some of the singers, some of whom surprised the judges - just like M. vimineum surprises me because of its tolerance to shade.

at March 23, 2022 No comments:
Email ThisBlogThis!Share to TwitterShare to FacebookShare to Pinterest
Labels: Invasive, Microstegium vimineum

The Untold Story Of Grasses

A very nice video that advocates for the saving of old growth grasslands and opposition to the mindless planting of trees everywhere. I particularly like how the narrator mentions that grasslands drew animals out of the forest "to discover the joys of light, infinite food, and the space to see and flee from predators"...because this was probably how our ancestors felt when they themselves moved out of the forest and into the light.

The story of the underdogs that took out their forest adversaries with powerful allies – fire and the great herds. Grasses created an open sunlit world, rich in plants and animals, including those that nurture and feed us and sustain our cities. Now all are threatened by a trillion trees. Most people don’t think about grass and dismiss ancient grasslands as mere empty space or degraded forests. The open sunlit habitats of half the world have been further neglected in the current tide of media promoting forests and tree planting as a quick fix for climate change. But grassy biomes have been carving a space in forests for millions of years. They created an alternative sunlit world, the inverse of forests – fire-loving and friendly to herds of herbivores. Ancient old-growth grasslands still exist today. Many are extraordinarily rich in plants and animals, which are restricted to their open, sunlit, grassy habitat. Grasslands have provided the world’s major seed crops, staple food for billions of people. Grassland animals were key to the development of our civilizations, providing transport, food and fiber. Global plans to plant billions of trees in vast areas could see the collapse of grasslands in the next decade. Our story was motivated by our concern for this impending disaster. This video gives voice to the sunlit, grassy world, calling for wisdom and understanding rather than policies driven by panic and ignorance. 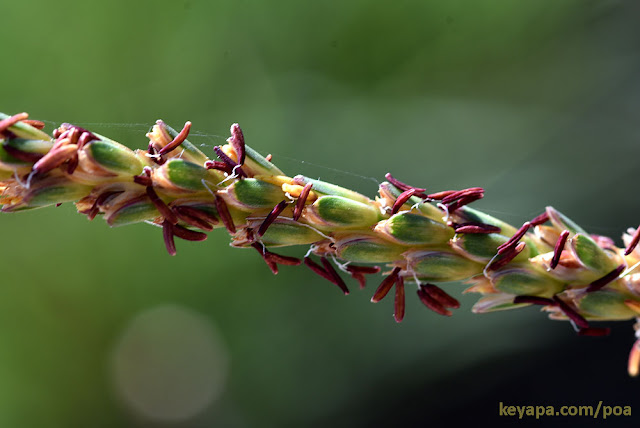 I like taking macrophotographs of grass reproductive structures, and when I was taking some pics of the native ornamental Trypsacum dactyloides (Eastern Gamagrass) I noticed something different.

Grass flowers are notoriously tiny, and in fact the flowerheads that we see at the macro scale are aggregations of so-called "spikelets", which may contain one to many "florets" (the actual flowers).

All the florets that I had seen so far have been perfect, with each floret having both male and female parts.

The male part is the stamen, which is composed of a filament holding up an anther, where the pollen resides. The female part is the pistil, which contains an ovary, a style, and a stigma. The anther and the feathery stigma are what people usually see easily when doing macro of grass flowers.

The spikelets of T. dactyloides were surprising to me because at first glance I noticed that the male and female parts seem to be located on different parts, and thus different flowers!

Trypsacum dactyloides is a native grass here in Florida that is widely used as an ornamental, both in city street plantings, and in suburban areas. It is an attractive plant, with wide dark green leaves and a kinda roundish habit. 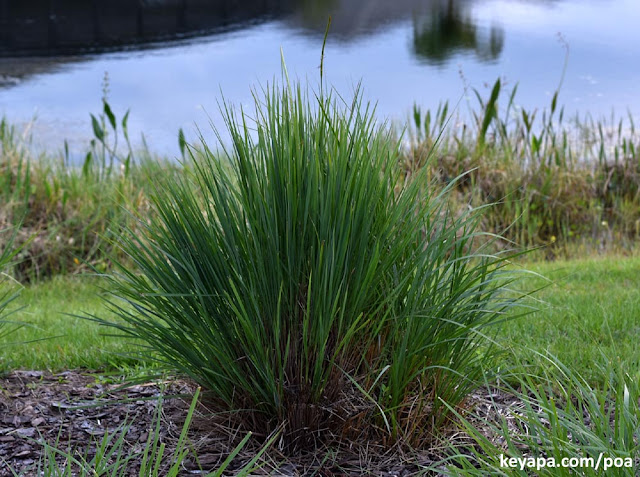 It turns out that this species, unlike many other grasses, is monoecious, with imperfect (or unisexual) flowers. Monoecious means that there are both male and female flowers on the same individual plant, and unisexual flowers have only either male or female parts.

In T. dactyloides, the male florets are situated on the upper part of the grass inflorescence, while the female flowers are located in the lower part of the same inflorescence. This is in contrast to bisexual flowers, which contain both male and female reproductive organs, and which I am more familiar with from my previous photos of other grasses.

Another grass species which might be more familiar to people and which also is monoecious is maize (Zea mays). In this grass, the male flowers are seen as long "tassels" on the top of the plant, while the female flowers are lower down in the plant and are the ones that form the "ear". The latter is what develops into the corn cob that we all like to eat.
And just to add to the confusion, it should be noted that there are dioecious grasses, although this is even rarer. In this case, the separate male and female flowers are also on separate individual plants! An example of a dioecious grass is Bouteloua dactyloides (buffalo grass). Due to the male and female structures being on different plants, this species needs to cross-pollinate.
But whatever the type, all these species are successful in what they do, given that they are all thriving in today's competitive natural world.
at March 07, 2022 No comments:
Email ThisBlogThis!Share to TwitterShare to FacebookShare to Pinterest
Labels: Macrophotography, Trypsacum
Newer Posts Older Posts Home
Subscribe to: Posts (Atom)