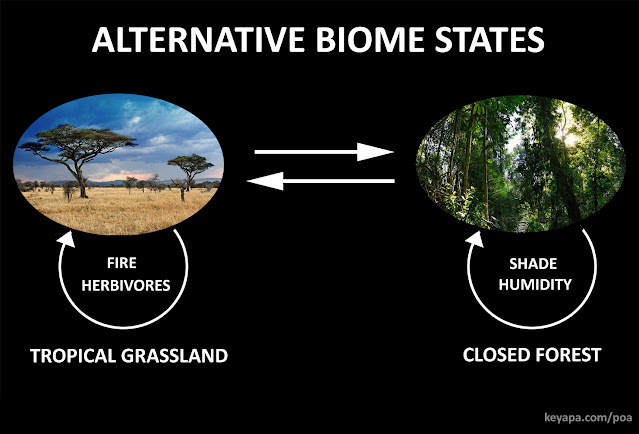 Old-growth grasslands are grass-dominated open biomes which are ancient (some are tens of millions of years old), have high endemism and diversity (they are more diverse than rainforests at some scales), and are slow to reassemble once they have been degraded (more than a millennium according to studies). This ecosystem is one of the most endangered in the world, and misguided efforts to fight climate change by mass tree plantings can only hasten their demise.

One of the major impediments to the widespread acceptance of the concept of ancient grasslands among the general public is the outdated notion that there is only one natural climax community. This wrong idea that ecological succession is a ladder-like process and that closed canopy forests (e.g. rainforests) are the ultimate goal in nature is deeply entrenched in the public consciousness. It promotes the wrong notion that all grasslands are simply forests that are waiting to happen, and are thus exempt from our protection and conservation.

It must be replaced by the more accurate paradigm of Alternative Biome States (ABS).

What are Alternative Biome States?

New research has shown that open old growth grasslands are a natural alternative to dark shaded forests, and that they can maintain themselves without any human intervention over thousands and even tens of millions of years. Neither grasslands nor forests are the "ultimate" expression and final state of natural succession. Instead, an area whose climactic and soil characteristics can theoretically support both grasses and trees alternates between the two stable biome states depending on other, more local factors.

What local factors keep the two biomes stable over time?

Grasses have harnessed two local factors to help push back forests. Some species have evolved with natural fire, while other grass species have partnered with large herbivores (e.g. elephants, bovids like antelopes, buffaloes, bisons, etc). Both of these "allies" can kill or weaken trees, as well as tree seedlings and saplings. This keeps the grassy biomes sunlit and open, which is the optimum environment for many sun-loving members of the Poaceae.

On the other hand, the dark humid interior of forests is not a welcome environment for most grasses. C4 grasses in particular grow best under the wide open and sunlit skies, and the high humidity and lack of wind also helps keep grass-induced fires from penetrating the inhospitable interior of the forest.

These counteracting forces on both sides stabilize the alternative biomes and allow each one to flourish.

How are these biomes switched from one state to the other?
Although old growth grasslands and forests are naturally stable over potentially long periods of time, strong perturbations can be enough to tip them over to the alternative state.
For example, one or two strong forest fires in a region plagued by drought could be enough to quickly turn a closed canopy forest to an open ecosystem, as fire-adapted grasses and other plants colonize the resulting gaps in the forest. This can create a strong feedback mechanism whereby the gaps are widened as the flammable vegetation contributes to more fires going forward, with large herbivores following the grasslands to help keep the trees out.
This scenario created the great savannas in Africa as early as 15 million years ago, when C4 grasses started pushing back the forests to create new and sunlit open landscapes. Evidence of the rise in grass-fueled fires during this period of grass expansion is etched in charcoal deposits, as well as in the phylogeny of savanna-living underground trees, whose lineages increased in response to the rise of the new open biome. It was also around this time when the ancestors of large iconic megafauna like antelopes and other mammalian herbivores radiated into many more species to fill the new ecosystem.
The opposite transition from forest to grassland is usually more gradual, but just as inevitable. If fire and mammalian herbivores are somehow excluded from open ecosystems in areas whose climate and soil can support both biomes, then trees will gradually shade out the grasses and other smaller sun-loving plants.
What can you do?
Champion and spread the new paradigm of Alternative Biome States (ABS) as a replacement for the outdated concept that ecological succession is a one directional process towards shaded closed canopy forests. The elevation of open ecosystems as a natural alternative to forests will help protect and conserve our ancient and biodiverse grasslands and the countless other plants and animals that live there.
References
Pausas JG, Bond WJ. Alternative Biome States in Terrestrial Ecosystems. Trends Plant Sci. 2020 Mar;25(3):250-263. doi: 10.1016/j.tplants.2019.11.003. Epub 2020 Jan 6. PMID: 31917105.
Tristan Charles-Dominique, T. Jonathan Davies, Gareth P. Hempson, Bezeng S. Bezeng, Barnabas H. Daru, Ronny M. Kabongo, Olivier Maurin, A. Muthama Muasya, Michelle van der Bank, and William J. Bond (2016). Spiny plants, mammal browsers, and the origin of African savannas. PNAS DOI: 10.1073/pnas.1607493113
at April 03, 2022
Email ThisBlogThis!Share to TwitterShare to FacebookShare to Pinterest
Labels: Advocacy, Old Growth Grassland, Research