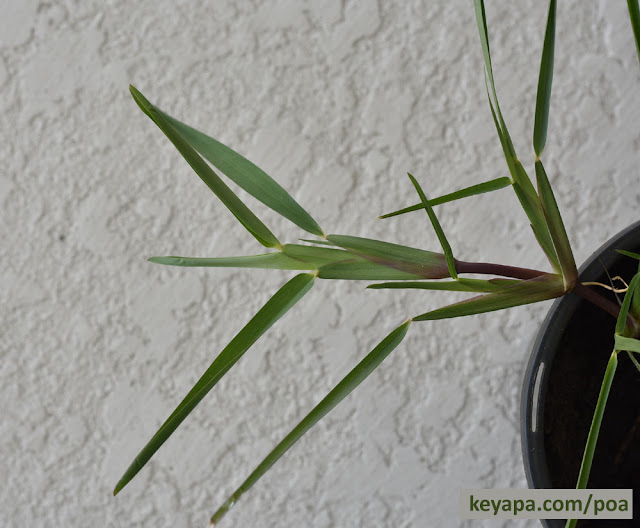 A lawn in a lawn right?
But interestingly enough, the species of grass used to create lawns varies widely as one goes from one region to another in the USA.
In our home in New Jersey, our really old lawn (which I inherited from previous owners) is a mishmash of cool season grasses like Poa pratensis (Kentucky blue grass), Fescue spp, and Lolium spp (eg. Perennial Ryegrass).

In Florida however, we were confronted by completely different species, those more adapted to the warmer weather all year round. In our case, a rhizomatous and stoloniferous grass called Stenotaphrum secundatum, which has the local name St. Augustine grass (and various other common names around the world).

From a distance, the major difference is probably the lighter color of the lawn. But when you actually look closely the change in habit is very obvious. S. secundatum is a creeper - its stolons or aboveground horizontal stems allowing it to "crawl" along the ground like some green hued centipede. This behavior is quite unlike its cool season brethren in the north, which at best have underground rhizomes.

I was so taken by this creeping behavior that I potted one, set it down on our lanai, and attempted for a short while to see how far it would stretch along the cement floor in its search for soil. It grew by around 5 cm in 12 days before I had to stop the experiment due to eternal circumstances, but I may repeat the experiment again later.

The composition of the lawn also affects how it is viewed even from far away sometimes. For example, in the image below, the lighter green areas are S. secundatum, while the dark lot is likely Paspalum notatum (Bahia grass). The border between the two species was amazingly straight most times, although S. secundatum seems to have the more pronounced tendency to encroach onto the other territory. In addition, I noticed various other plant species (aka weeds in lawn parlance, haha) had a harder time establishing themselves in the dense masses of culms and blades and stolons that S. secundatum creates.

A third type of turf grass in the community is a very small, fine leaved species used for the golf areas, and the next time I'm there I'll be sure to take a sample and try to ID it. I know some people are quite ambivalent (or even hostile) towards turf grass, but after being in an HOA community that uses various species to populate the landscape, I have started to become quite interested in the ecology of lawn grasses.

More to come on this perhaps.

at May 31, 2022 No comments:
Email ThisBlogThis!Share to TwitterShare to FacebookShare to Pinterest
Labels: Lawn, Paspalum, Stenotaphrum

Let Them Grow Cake! Climate Change and The Wheat Crises

Triticum  aestivum (common wheat) and a few other species in the grass genus Triticum  (T. durum and T. compactum) are the source of one of the most important staple foods in the world. These grasses are grown in more than 200 million ha of land worldwide, and in 2020 world annual production of wheat stood at 760 million tons. But now an unfortunate combination of climate change and war have threatened our food supply.

Extreme weather events in almost all the wheat producing regions in the world have been causing chaos in the food supply. India, one of the top three wheat exporting countries,  has seen record high temperatures that have severely impacted their crops, so much so that the Indian government just declared limits on wheat export. In China, floods have also potentially compromised wheat supply, and in the EU, US, and Canada various combinations of drought and unseasonably warm temperatures have also threatened wheat crops. Meanwhile, Russia seems relatively unaffected by the extreme weather events going on elsewhere, but the war in Ukraine has limited its role in at least helping to dampen the growing impact of climate change on this year's food supply. Some estimates have declared that the world has only 10 weeks supply of wheat left, and this will be sure to create increases in the prices of bread and other staple foods going forward.

In the end, we owe it to ourselves and to our children to makes sure we address the growing impact of climate change, not only on other species, but on our own, before it becomes too late.

at May 22, 2022 No comments:
Email ThisBlogThis!Share to TwitterShare to FacebookShare to Pinterest
Labels: Climate Change, Triticum

A Himalayan Miracle: The Terai-Duar Grasslands of India, Nepal, and Bhutan

At the foot of the Himalayan mountain ranges lies a narrow band of grasslands and savannas that is only 25 km wide, but features some of the tallest (non-bamboo) grasses in the world, and are a host to the most amazing animals.

Not only is this area home to the rare one-horned rhinoceros (Rhinoceros unicornis), but it also boasts a multitude of ungulates (deer and their ilk), as well as the Asian Elephant (Elephas maximus) and the Bengal Tiger (Panthera tigris)!

I first heard about these grasslands from a nature documentary about biomes (Earth 2: Grasslands, with David Attenborough), which briefly showed gargantuan Asian elephants, who were themselves dwarfed by tall grasses that almost hid them from sight. The area was not named, but I was curious about it. Through the miracle of google I finally managed to pinpoint the location as the Terai-Duar grasslands, which spans three countries (India, Nepal, and Bhutan), and is maintained by annual flooding during the monsoon season, and not only by fire or grazing.

The grasses that serve as the foundation of this system include Saccharum spontaneum (called kans grass and talahib where I grew up), which can grow up to 4 meters tall and more. Another equally tall grass in the place is Cenchrus purpureus, which appropriately enough is sometimes called elephant grass (but which is called Napier grass most times, and which I encountered in southern Florida). The terai also has stands dominated by the much shorter Imperata cylindrica, the same cogon grass that dominates in many other regions of the world. I found it interesting that many tourist and even nature sites kept calling them the tallest grasses in the world, even though bamboos of course can get much much taller.

I once mentioned I get really nervous about being alone in a shaded closed canopy forest, where my over active imagination always thinks there is some predator lurking in wait behind the next tree trunk. But being submerged in these tall grasses must be equally scary, something that Stephen King explored in his novelette In the Tall Grass. In this case, the fact that the Terai grasslands are home to the Bengal Tiger probably has something to do with my anxiety.

Be sure to visit and be amazed by this fantastic place the next time you are in that area!

Book Review: The Death of Grass by John Christopher


I admit that I probably would not have read this before my interest in the Poaceae.

I am an ardent science fiction reader, but this post-apocalyptic novel was published in 1956, and I tend not to read older SF. Nevertheless, once I started reading it, I found to my surprise that it was actually quite interesting, although some of the language and viewpoints of the characters were quite dated and made me cringe and roll my eyes.

The story involves the spread of a virus named Chung-Li, which devastates rice crops in China, causing mass starvation. Although confined at first to rice, the virus soon develops variants which attack all members of the grass family. Caught in the backdrop of this ecological catastrophe, a mild mannered British man named John and his family try to safely make it to his brother David, who has started growing potatoes in a farm that is sheltered in a well protected valley. On the way they pick up various other people who can help them, and John slowly transforms into a hardened survivor who will stop at nothing to protect his family.

The author does a very good job of emphasizing the importance of the grass family to the very fabric of our lives. Not only does he show the disintegration of governments and societies when the virus expands worldwide, but at various points in the narrative, the characters note the disastrous consequences of the loss of grasses because these make up the vast majority of our food.

"Wheat," David said, "and oats and barley and rye – not to mention fodder for the beasts."

In addition, the author is thoughtful enough to mention the scientific name of the grass family, and even goes so far as to throw in the taxonomic nomenclature of some grass  genera and tribes.

Roger went on: "The appetite of the Chung-Li virus was for the tribe of Oryzae, of the family of Gramineae. Phase 5 is rather less discriminating. It thrives on all the Gramineae."

Roger smiled, not very happily. "I’ve only picked up the jargon recently myself. Gramineae means grasses – all the grasses."

"Grasses," he said, "that includes wheat."

"Wheat, oats, barley, rye, that’s a starter. Then meat, dairy foods, poultry. In a couple of years’ time we’ll be living on fish and chips – if we can get the fat to fry them in."

The disappearance of grasses not only impacts the entire food chain that enables civilization, but it also impacts the surroundings, as noted by one of the protagonists:

‘They frightened me. I hadn’t understood properly before quite what a clean sweep the virus makes of a place. Automatically, you think of it as leaving some grass growing, if only a few tufts here and there. But it doesn’t leave anything. It’s only the grasses that have gone, of course, but it’s surprising to realize what a large amount of territory is covered with grasses of one kind or another.’

Although the author has done his botanical homework, he seemingly stumbles at certain points in the narrative. For example, as rationing starts to take its toll on the country, some children complain about the rationing of sweets.

"Potato-cakes,’"John said, "and the empty tin circulating along the tables for you all to have a sniff. Very nourishing too."

Davey said: ‘Well, I don’t see why they’ve rationed sweets. You don’t get sweets out of grass, do you?’

But of course, most sugar is actually derived from sugarcane (Saccharumn officinarum), which is also a grass!

Overall, I found the novel interesting and entertaining, and the author does not shy away from describing the savagery of man when civilization collapses. In one of the Stephen King novelettes, the phrase "arc of descent" is used, and I think that phrase is quite apt in describing the way the protagonist in this book evolves from beginning to end.

If you have the time and inclination, give it a go. An electronic version (kindle) is available from amazon.com, and probably from other booksellers worldwide.