We went on our first cruise in 3 years since the pandemic. Our ship landed in 4 destinations, and I spent some time botanizing close to shore.

The locations varied in terms of the ease of botanizing and the diversity of species found.

The first island is wholly owned by Royal Caribbean, and it is a tiny piece of land that is immaculately kept as clean as an urban park.

Most of the specimens I found were ornamental grasses that were deliberately planted, including Trypsacum dactyloides and the fountain grass Cenchrus setaceus (?) .

However,  scattered along the undergrowth I found smaller specimens, such as an Axonopus sp and a single specimen that looks like a tiny Eragrostis or  Poa sp. These tiny weedy species still thrived despite the wholly artificial nature of the location.

I walked along the Avenida Rafael E. Melgar, the coastal road that leads from the International Cruise Terminal to the downtown proper of San Miguel de Cozumel. It was a pleasant 5 km walk along a well maintained sidewalk, and I descended at times onto the beach proper, which was mostly rocky and small.

Along the way I encountered not only the usual weedy species that seemed to proliferate in all urban locations, but lawn turf grasses and the occasional coastal inhabitants like Paspalum vaginatum. This species had rigid looking leaves and robust stolons, which it used to crawl along the rocky and sandy beaches.

I also came upon a few specimens that looked remarkably like Andropogon spp on first look.

Many of the larger areas had specimens of Megathyrsis maximus, which managed to rake in some sun along the edges of wooded lots next to the sidewalks.

Quite a few areas had the turf grass Cynodon dactylus, which also showed up as escaped specimens in cracked sidewalks and parking lots.

Amazingly, I also came upon many more specimens of the same tiny putative Eragrostis or  Poa sp that I had encountered once in Cococay. In one case, it had swamped the original inhabitants of a stone container along the sidewalk!
But by far the most exciting find I made was a species that I at first was disinclined to think was a grass. It had an inflorescence that looked nothing like the usual spikelets, but I later typed it as Paspalum fimbriatum.
The spikelets of this species had glumes and lemma that formed a fringe around the florets. Its  leaves are relatively broad,  with a slight sinuous quality in some.

Other specimens that I encountered in Cozumel were:

Sporobolus jacquemontii (which I also encounter a lot in Florida)

This stop was the least attractive in terms of surroundings.  Our ship docked in the center of the city Coxen Hole, and it was raining sporadically the entire time.

I walked east along Main St. after disembarking from the ship, although in hindsight I probably should have gone the opposite direction.

The empty lots were filled with Megathyrsus maximus, while sprouting from the cracks in the sidewalks and other marginal places I found the usual "weedy" species, including Eustachys sp, Digitaria sp, Echinochloa crus-galli, Eleucine indica, and a single Cenchrus sandbur sp.

I returned to the ship after enduring the sporadic rains for perhaps a couple of hours, with the hope that the next landfall would yield better returns.

I was not disappointed, because the stop at the Puerto Costa Maya near the town of Mahahual was the most fruitful of all.

The port itself was clean and large, with the usual tourist shops. But it was the surrounding area that made the area a prime spot for botanizing grasses.

The streets were wide and clean, with resorts and large private homes interspersed with empty lots. Closer to the Port, the wide street (Avenida P del Puerto) did not have sidewalks along the sides, but it instead had a very wide island that was filled with trees and plants. Amazingly enough, a dirt path run through the center of the island, so pedestrians using this "sidewalk" seemed to be in some forest path! It was a rather innovative idea, and one that I had never encountered before.

It goes without saying that I felt safe wandering into the smaller side streets, and just a few blocks from the port I came upon an empty lot that was filled with all sorts of species.

It was a literal field of botanizing delights, with waving masses of Eustachys sp mingling with clusters of pink and red Melinis repens.

Other inhabitants included the ubiquitous Dactylocnium aegyptium, Dichantium sp, as well as Cenchrus sp and an unknown species that was probably a Paspalum. There was even a large Megathyrsus maximus to one side.

Beyond the field I continued in the general direction of Mahuhual Beach, and I continued to encounter interesting specimens.

Once in awhile I came upon individual plants that I typed as Andropogon (perhaps A. virginicus because of a sheath that partly covers the spikelets) , which surprised me, as I always associated that clade with North America, and not tropical regions.

I also found an attractive broad leaved grass that I identified as Paspalum mandiocanum. The leaves had minute dark sinuous curves along their edges, and I found specimens along the sides of one of the main thoroughfares (Carretera A Mahahual).

Even the crabgrasses caught my attention. One specimen had a beautiful sinuously striped rachis and ciliated spikelets, and I typed it as Digitaria ciliaris.

I also encountered specimens that I could not type, including a tallish and elegantly slim grass that had alternating green and white appearance to its culms (due to the leaf sheaths staying close to the culm). I typed it to perhaps Hyparrhenia rufa.

All in all, it was a great day for botanizing, and a great end to my December Caribbean Cruising trip! 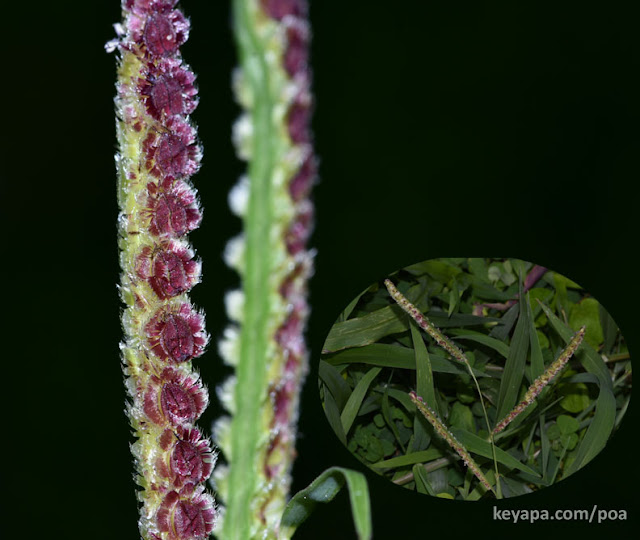