I've discovered the joys of being able to identify some grasses to species. And I know how important such skills are in expanding one's knowledge. But there is just as much merit to studying the larger picture, and studying the way species are grouped together. This means that in order to truly understand a group of organisms, you have to study the relationships between the members of the group, as well as their evolutionary history.

This is where phylogeny becomes useful, because it is the study of how organisms are related to one another via evolution.

Our understanding of the relationships between grasses and their evolution has progressed in leaps and bounds. In many ways, the Poaceae are the most extensively studied plant family, due to the economic importance of some of its members (rice, wheat, corn sugarcane, etc), and this is reflected in the many phylogenetic and evolutionary studies of the group.

A few recent studies in 2022 in particular have expanded on the detailed evolutionary history of the Poaceae (Gallaher et al, 2022; Huang et al, 2022).

Some of the more recent discoveries:

In order to more easily remember and thus understand the relationships between these subfamilies and the species under them, the different subfamilies are grouped into 3 major clades.

Each of the clades are monophyletic (ie. all the members of a clade are derived from a single common ancestor), and each clade name is an acronym of the names of the subfamilies within that clade. They are easily memorized using easy acronyms that you should remember.

I'll skip the APP clade for later, as it represents the earliest diverging grasses that most people never encounter.

The two major grass clades are the BOP and the PACMAD groups, which represent more than 99% of the species in the family.

The BOP acronym stands for Bambusoidea (the bamboos), Oryzoidea (rice and its relatives), and Pooideae (many of the cold season turf grasses like Kentucky Bluegrass).

Now some may balk at trying to remember such tongue twisting subfamily names, but I use a trick that makes it somewhat easier. That is, every single subfamily name ends in "eae", and the 4 letters before that are always slight alterations of "oid", including "soid","coid","doid" or "zoid".

This makes it relatively easy to remember the names. For example, bamboos are BAMBU-zoid-EAE. And the rice subfamily is ORY-zoid-EAE. Finally, the turf grasses and other Northern Hemisphere cool season species are PO-oid-EAE.

The PACMAD clade is the other large grouping of grasses, and the acronym stands for the Panicoideae (e.g. many of the warm season grasses in USA tallgrass prairies like Andropogon spp), Aristidoideae (Aristida spp in Pine Savannahs in the Southeast USA), Chloridoideae (e.g. Muhly grasses), Micrairoideae, Arundinoideae (e.g. Phragmites), and the Danthonioideae (e.g. Pampas grasses of Cortaderia spp). The names can be easily remembered using the same rules as for the BOP clade:

The relationships between the subfamilies and the time they diverged are summarized in the diagram below (mya= millions of years ago). The phylogeny is derived from studies of chloroplast DNA sequences in the paper by Gallaher at al, 2022, which has some differences from that presented by the equally recent Huang et al, 2022. 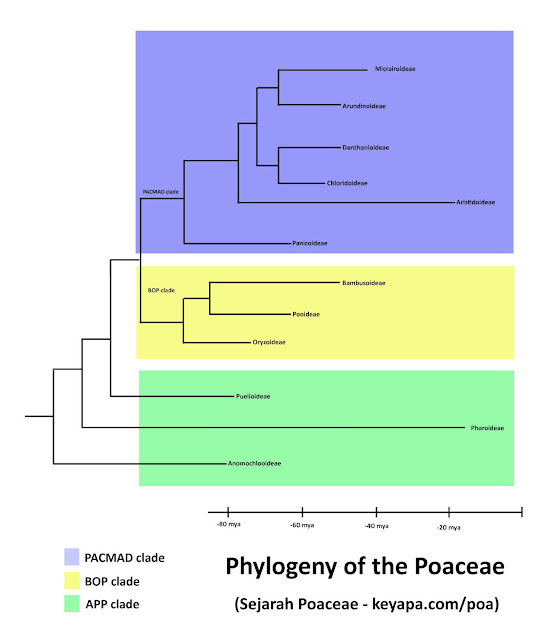 As can be seen from the diagram above, the crown dates for the core grass subfamilies (BOP and PACMAD) range from 74 mya (million years ago) for the Oryzoideae, to 14 mya for the Aristidoideae. In the PACMAD clade, the Panicoideae is sister to the rest of the clade, while in the BOP, the Oryzoideae is the sister group to the Bambusoideae and the Pooideae.

However, in the Huang paper (which looked at the nuclear genome phylogeny), the Aristidoideae is sister to PCMAD, and not the Panicoideae, and the Micrairoideae is possibly sister to Panicoideae. The Puelioideae may represent two separate subfamily lineages.

It would be interesting to see how this discrepancy is resolved in future studies.

It's also interesting to compare the subfamilies with regards to the number of species and genera within. As can be seen in the table below (Soreng et al, 2017), the largest subfamilies are the Pooideae in the BOP clade (with 4126 species), and the Panicoideae in the PACMAD clade, with 3325 species.

Here is a list of the major subfamilies and some selected species within each.

Bambusoideae (B in BOP)

These are the bamboos, which many people don't realize are also grasses.

This subfamily diverged 54 million years ago, and probably originated in the Indomalayan region. All are C3 plants, and there are more than 1600 species in this group.

The bamboos are grouped into 3 groups, with the temperate woody bamboos at one end, and the tropical woody and herbaceous bamboos at the other.

Bamboos are thè tallest grasses in the world, with some species more than 30 m tall!

Example of the bamboos include Bambusa, Phyllostachys, and Dendrocalamus.

This subfamily contains about 117 species, and includes the two domesticated rice, the Asian species (Oryza sativa) and the African species (Oryza glaberrima). It originated 74 mya, most likely in the Afrotropics, and all the species are C3 plants.

Rice is one of the most economically important plants, with its grains feeding billions of people everyday.

This is the biggest grass subfamily, with more than 4100 species! It includes all the cold season turf grasses common in the USA, as well as domesticated food species such as wheat (Triticum spp) and oats (Avena spp). It originated 62 mya, most likely in the Palaearctic.

It is one of two subfamilies that has evolved specialized freezing tolerance. In this group, ice binding proteins evolved which decreased the rate of the formation of ice, as well as altering the shape of the ice crystals being formed. These anti-freeze proteins prevent the formation of large crystals that can physically damage cells and tissues. Thus, the Pooideae dominate cool areas in the Northern Hemisphere. All are C3 plants.

This subfamily is the largest in the PACMAD clade, and second largest in the Poaceae with more than 3300 species). It includes many of the warm season grasses, such as the major tall grass prairie species in the USA, as well as ferocious global invaders like cogon grass.

It evolved 62 mya in the Afrotropics, and this is one of the subfamilies that dominate warmer areas in the world, with many of its members using C4 photosynthesis. In fact, this subfamily contains the majority of grasses with C4 photosynthesis.

It also includes some of the most economically important plants like maize/corn (Zea mays) for food, and Saccharum officinarum (sugarcane).

This subfamily has around 367 species, and it is one of the four grass subfamilies that has C4 members.

It originated fairly recently, an estimated 17 mya in the Afrotropics, and it includes some of the well known grasses that form the foundation of the Longleaf Pine savannas in the Southeastern USA, such as Aristida beyrichiana.

This subfamily evolved 55 mya in the Afrotropics, and includes many C4 plants. Along with the Panicoideae, it is one of the dominant grasses in the warmer parts of the world. The subfamily has around 1600 species.

Some of the grasses in my must-see list include species in this subfamily, including Swallenia alexandrae, which is found only in the Eureka Dunes in Death Valley National Park, CA, and the Orcutt grasses, which are endemic to ephemeral vernal pools in the same state.

Some genera in this subfamily are Muhlenbergia, Orcuttia, Eleusine, Cynodon, Chloris, Sporobolus, Swallenia, and Bouteloua.

Micrairoideae (M in PACMAD)
This is a relatively small family whose members are generally not known. It originated around 41 mya, probably in the Indomalayan region. It has around 200 species. It is sister to the Arundinoideae below.

This subfamily diverged 50 mya, probably in the Afrotropics. It only contains 36 species, but its most notable members are the well known genera Arundo and Phragmites.

Phragmites australis is a major invasive in some parts of the world, and might hold the title of the most widespread plant in the world. I have seen it in Florida and I have seen lots of it high north too. It is amazingly adaptable.

This subfamily diverged 51 mya, and contains around 300 species. I've always thought of them as the Pooideae equivalent in the Southern Hemisphere, although its sister group is the Chloridoideae.

The most notable genus in this clade is Cortaderia, which includes the pampas grasses like Cortaderia selloana.

Knowledge about the relationships between members of the Poaceae, and how they are grouped together, allows us to derive general rules that govern the ecology and biology of these amazing organisms.
So the next time you recognize or focus on a particular species, remember to find out where they belong in the subfamilies of the Poaceae. Are they in the PACMAD or BOP clade? What subfamily do they belong to, and when did this group originate? Which other subfamily is closest phylogenetically to that taxon? All questions that will surely help you understand that species in a deeper way.
References:
Gallaher, Timothy J., Peterson, Paul M., Soreng, Robert J., Zuloaga, Fernando O., Li, De-Zhu, Clark, Lynn G., Tyrrell, Christopher D., Welker, Cassiano A. D., Kellogg, Elizabeth A., and Teisher, Jordan K. 2022. "Grasses through space and time: an overview of the biogeographical and macroevolutionary history of Poaceae." Journal of Systematics and Evolution, 60, (3) 522–569. (The Biogeography of Grasses (Poaceae)) https://doi.org/10.1111/jse.12857.
Huang W, Zhang L, Columbus JT, Hu Y, Zhao Y, Tang L, Guo Z, Chen W, McKain M, Bartlett M, Huang CH, Li DZ, Ge S, Ma H. A well-supported nuclear phylogeny of Poaceae and implications for the evolution of C4 photosynthesis. Mol Plant. 2022 Apr 4;15(4):755-777. doi: 10.1016/j.molp.2022.01.015. Epub 2022 Jan 31. PMID: 35093593.
Soreng, R.J., Peterson, P.M., Romaschenko, K., Davidse, G., Teisher, J.K., Clark, L.G., Barberá, P., Gillespie, L.J. and Zuloaga, F.O. (2017), A worldwide phylogenetic classification of the Poaceae (Gramineae) II: An update and a comparison of two 2015 classifications. Jnl of Sytematics Evolution, 55: 259-290. https://doi.org/10.1111/jse.12262
at January 16, 2023
Email ThisBlogThis!Share to TwitterShare to FacebookShare to Pinterest
Labels: Research